As I arrived at the office this morning, I took a call from Ernie, a reader from Congleton in Cheshire.

He's had a spot of bother with the RSPCA, or more particularly with an individual Inspector.

Basically, Ernie cleans windows for a living. There's one group of 4 bungalows where he does the windows of some OAPs. The residents were bemoaning the fact that there are huge numbers of magpies around the area, and they hardly see songbirds any more.

So Ernie stepped up and offered them his services. He had a Larsen trap in his garage, and he offered to set it up and reduce the local magpie population. In fact he was quite successful, even using just roadkill and eggs as bait, and no call bird. He had no wish to kill the magpies, and was driving them some way away and releasing them in woodland. Not that the RSPCA would have known that.

Anyhow, a few days ago his trap disappeared. Eventually he discovered that a certain RSPCA Inspector had 'confiscated' it. That is, he went onto private land and removed someone's private property, which so far as I can tell was being used entirely lawfully (within the terms of the General Licence). In my book that sounds more like theft.

So once Ernie got it touch, the RSPCA apologised profusely for overstepping the mark and returned the 'confiscated' trap? Did they heck!

The Inspector has bombarded Ernie with police-speak, causing him considerable stress and worry. Ernie is now confused about his legal position, and worries that all this may affect his ability to renew his Shotgun Certificate when it next comes up (he's a keen clay shooter).

To cap it all, our charming 'Inspector' called Ernie last night and said he was 'finalising the paperwork'. He said he was recommending that Ernie should 'just get a caution', and asked if he would agree to the destruction of the trap. Ernie felt so bullied by this stage that he mumbled 'I suppose so'.

This sort of bullying by the RSPCA has to stop. Give someone a uniform, a shiny badge and a paramilitary title, and the temptation is to start throwing their weight about. It's human nature, and history provides many examples of just how wrong things can get. There needs to be a system of checks and balances. Who inspects and regulates these people?


I've sent the following email to the RSPCA's press office, and await their response: 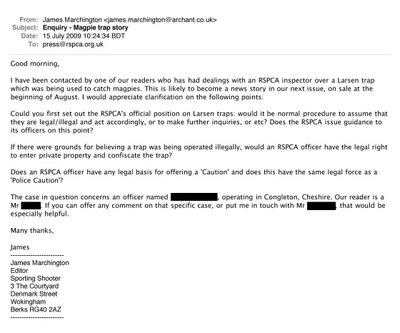 UPDATE: Two days later and the response is... a deafening silence. The next issue has gone to press, complete with the news story in which we state that the RSPCA did not respond to our request. No doubt they're a bit quicker off the mark when it's the Sun calling!

Posted by James Marchington at 09:32

I would suggest our poor reader speaks to the local police about the theft of his trap! The RSPCA are not above the law, requiring police support to forcibly enter buildings. The chap probably just wants to get on with his life but he has comitted no crime and should not admit any wrong-doing. Can BASC offer any advice or help?

In Scotland it is illegal to set a Larson trap without first informing the local police wildlife officer. He will then issue you with a trap number that must by law be placed on the trap in question.

Just to confirm what Vicky has said about speaking to the local police!! If it was being used lawfully then the reader shouldn't worry if it has been destroyed. He agreed under duress and the belief that the Inspector was himself acting in a lawful manner. You would have a clear case for a civil law suit as well as possible criminal charges levelled against the officer, although proving the offence of theft may be difficult as he may truly have believed he had a right to remove and it was only destroyed on the say so of the owner. Speak to police and a solicitor!!

While he may not get the impersonating police bit to stick, it certainly sounds like he has a case against both the 'officer' and his employer.

Theft is theft, criminal trespass is ....
If the employee believed that he had more power than he legally does, and can be shown to have come to that assumption through the action or inaction of his employer his testimony will be useful later.

Just because the cops aren't interested in pursuing a prosecution (ok just a guess) is no reason not to put the boot on the other foot. Once the ball starts rolling the RSPCA will want to settle out of court. The costs for them will soon mount up and the potential for bad publicity (that affects fundraising) is massive.

Go on Ernie its only a few forms to fill in. when they phone you, just keep repeating the phrase
'i look forward to seeing you in court".