A turning point for conservation?

I take my hat off to Chris Packham. His taste in music may be suspect; his taste in dog breeds even worse. But... he has achieved the impossible. He has dared to challenge the high priests of conservation and produce a programme - broadcast on the BBC no less - that gets right to the heart of the problem.

Watch it here. Do it now, before it drops off iPlayer. Really - whatever you were planning to do tonight, drop it, and watch this instead. This is history being made. A turning point for conservation. We will look back at this programme and say "That's when the tide turned".

Of course, as a shooter, I'm delighted that he used the example of the grey partridge to illustrate a successful conservation project - particularly that he highlighted the excellent work of the Game & Wildlife Conservation Trust, and Dick Potts. Good grief, he even managed to mention game shooting in a positive light.

But this programme goes much deeper than that. It's an honest look at the reasons behind the catastrophic decline in birds, mammals, insects and wild plants in the UK during my lifetime.

There's no finger pointing and name calling. Just honest interviews with farmers who say, simply, I can't afford to farm wildlife, I have to make a living.

And, crucially, Packham exposes the nonsense of flagship single-species conservation projects run by organisations like the RSPB. Projects that may be great for drumming up political support, funds and membership, but don't tackle the root of the problem.

As an aside, it's ironic to see the RSPB taking corn buntings from the nest, hand-rearing them and then releasing them elsewhere, bragging about the fabulous conservation benefits to this threatened species. When the very idea of doing the exact same thing with hen harriers makes their blood boil with fake rage at the shooting estates that would love to work with them on such a project.

Anyway, back to the point. I have enjoyed watching the pragmatic Packham bite his tongue when soppy Kate Humble makes some infantile comment about cute n fluffy wildlife. Last night's Springwatch was a case in point - a pair of buzzards (don't they just eat worms?) had rounded up a bevy of rabbits, voles, moorhen chicks and, yes, an ickle fluffy duckling, for their young. Humble seemed close to tears; Packham just shrugged as if to say 'What do you expect?'

Now Packham has established himself as one of TV's leading conservation experts, he has the clout to say what he believes. And God bless 'im, that's exactly what he's gone and done.

I do hope I'm right, and this marks the start of a new era in conservation thinking, where we focus on the real issues, and doing something about them, rather than leaving it to organisations like the RSPB to exploit the subject for their own political and financial gain.

Use and abuse of badgers

Like statistics, cute-looking animals are a gift to anyone with a political axe to grind.

You can use them to prove any point you like - they won't answer back, or worse still go running to the papers complaining about being used to score political points (always a risk if a politician invokes nurses, or single mothers, or etc, to support an argument).

I've often thought it would be fascinating to study the way the foxhunting debate polarised into a Left vs Right argument, with the welfare of the fox trampled underfoot in the rush to trade insults about privileged toffs and unwashed lentil-munchers.

Sadly I don't have the time, or the government funding, to do that sort of research myself. But... today I discovered that there's a scientist doing exactly that, only with the badger/bTB 'debate'.

I have my elder daughter Emma to thank for the tip-off. As part of her veterinary studies, she attended a lecture by Dr Angela Cassidy, from the University of East Anglia, on the media coverage of the Badger 'controversy' in the UK press.

You can download a pdf of one of Dr Cassidy's earlier talks here (This link may show the document in preview form, if I've got it right). It makes fascinating reading.

She appears to find that the badger issue polarises people into rural vs. urban, left-wing vs. right-wing. Discussion tends to focus on culling rather than disease and its control. There is strong evidence of lobbying creating coverage in the media at key moments, such as in the lead-up to the General Election. And new scientific evidence tends to cause arguments about the science itself - the protagonists entrench their positions and argue about the validity of the science, rather than taking the opportunity to reconsider the best course of action.

There's also an interesting section on the use of imagery by different groups - cute n cuddly badgers by one side, vicious snarly badgers by the other. And she looks at the presentation of the badger as 'good' and 'bad' by groups with different perspectives over the years, going back through Tommy Brock and his ilk to the days long before badgers were associated with disease.

It's hard not to find yourself drawn in, even reading Dr Cassidy's work, and ask yourself "Is she pro or anti?" That's kind of beside the point. Her work is a valuable insight into the way something that should be a straightforward, practical debate gets hijacked, and becomes the focus for a much deeper disagreement between groups with opposing agendas; and the media tricks both sides resort to in their attempt to win the day... while the cattle, the farmers, and the badgers, continue to suffer.

This isn't the first time animals have been used this way, and it certainly won't be the last. We would do well to understand the phenomenon.

Just popping out for a spot of woodland management. I may be some time...

How does this sound? Your own sporting estate in miniature - 13½ acres of mixed woodland tucked away in lovely countryside near the Suffolk coast.

Through the gates and up the private drive is a timber-framed, barn style house, hand built in oak and sweet chestnut, with solid oak floors, inglenook fireplace with log-burner, and a Rayburn cooker.

It's 'off grid' - electricity comes from a generator, and water via a hand-operated pump from a borehole, although there's planning permission for a wind pump.

There are no public rights of way, and it comes with full sporting rights. If you tire of walking round your own patch, there are 200 acres of Woodland Trust woodland opposite.

Nearby is a pub and farm with a cafe, and there's a bus stop serving local villages - Framlingham is 3 miles away, and Snape 6 miles.

The sale particulars say that the property must be used for woodland maintenance (I imagine that's part of the planning permission), and it comes with all the tools required for the job, including a tractor, grass cutter and mini digger.

All this is on offer for a mere £315,000 - it's enough to make you think about jacking it all in and going off to live in the woods!

PS If you're seriously interested, drop me a line and I'll pass on the vendors' contact details.

Nice lens, shame about the focus

I went out again today with that Canon 300mm 2.8 L. It's been gradually dawning on me that something isn't right - and I think I've worked out what. 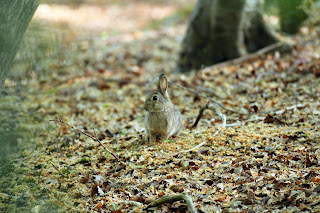 Quite simply, it doesn't focus where you think it does. This photo of a rabbit was what settled it for me. I know I focused on the rabbit's eye; the little red light blinked on it, it looked totally sharp in the viewfinder - but when I looked at the image on the camera's preview screen, the rabbit wasn't sharp, as you can see clearly in the cropped-in version below. Darn!

OK, I thought, camera shake - I was using a monopod, but it was only 1/125th of a second. But hang on, look at the leaves a foot in front of the rabbit: sharp as you like.

So I did an experiment - all very scientific, using the fence around our newly-dug vegetable patch. Sure enough, at a range of 10 yards, the actual focus is about 6ins in front of where you think it is - the point where you've actually focused, and where it looks sharp in the viewfinder. 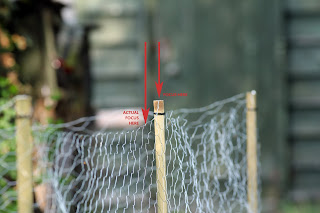 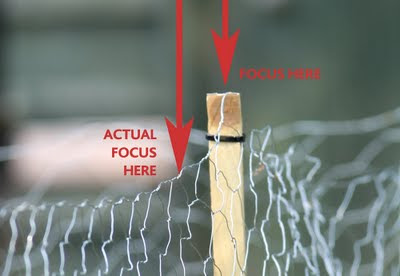 It's not really practical to 'aim off', so I'm going to have to investigate this further. The effect is identical with the lens on my 20D, and my 70-200 lens behaves impeccably on both camera bodies, so the lens itself is chief suspect at the moment. Comments and suggestions from more experienced photographers will be most welcome!

UPDATE 1: Hmm, bit of googling and I'm already discovering there's more to this than meets the eye - and maybe there was a reason why the 550D was about a quarter the price of the 5D Mk II I really wanted.

UPDATE 2: Thanks to the readers who've offered helpful suggestions in the comments. I tried a more scientific test, downloading a test sheet here,  and photographing it following the instructions. The results suggest the camera is fine - I got accurate results with a Sigma 70-200mm 2.8, and a Canon 50mm 1.8 - but the 200mm lens is showing a significant degree of what I now know is called "front focus". The focus point for all three photos below was at "0" - these are cropped in to show the result. 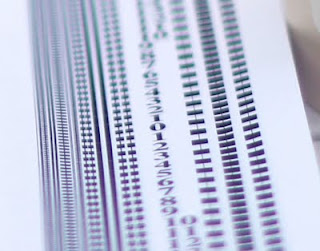 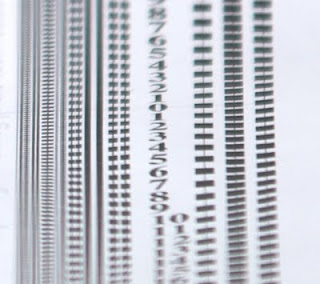 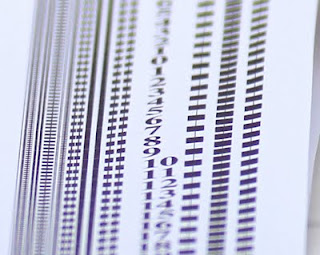