I've switched to a calmer look to this blog, mainly because the old white-text-on-black-background made my eyes go funny. Hope you like it, but do let me know either way. It's a simple matter to apply a different theme if readers prefer it. 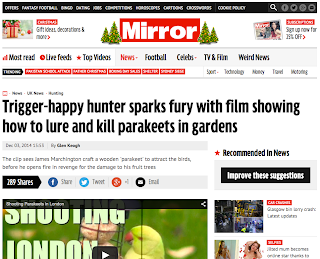 Good grief, the tabloids had a field day with my short video on AirHeads, about decoying a parakeet that was shredding my apple trees. I was labelled "deranged" by the Evening Standard, and "super posh" by the Mirror.

In fact this destructive alien invader has been on the General Licence for a while, for the specific purpose of allowing people to protect things like... well, fruit trees. That didn't stop the RSPB, Animal Aid, PETA and other loonies making misleading statements to the press, giving the impression that shooting parakeets was probably illegal and I would most likely be banged up.

The video attracted some classic "hate" comments - the usual threats to kill or maim me (you gotta love these animal lovers), including one from a chap so incompetent that his mobile phone number is still just two clicks away from his threat to "put me in a wheelchair for the rest of my life". My favourite was the one that said I deserved to "be sodomised by a large African man". Tautology, racism and homophobia in one short phrase - that's got to be some sort of record!

Shooting rabbits off a quad bike

Just go and film Geoff, they said. He's shooting rabbits off his quad bike, they said. Sure, no problem. Filming off a quad bike zipping across rough ground - I can handle that. Oh, and it's in the pitch dark...

Actually it came out not half bad, with the aid of some cunning lighting rigs powered by the fabulous Deben lithium lamping batteries (how does the film industry cope without these things?).

Mind you, my thighs took a week to recover from all that clinging on. I don't ride horses, but I imagine the problems are similar - at least, they would be if you were riding a horse and trying to hold a camera steady at the same time.

Filming foxshooting through a thermal imager

The second half of this episode of the Shooting Show is a piece I filmed with foxshooter Robert Bucknell and his friend Nigel Fulton - we were trying out some night vision gear, including a thermal imager. I managed to rig up a recorder to the thermal viewer, which gave a unique view of the night's events. Scroll to 11:32 for my bit.