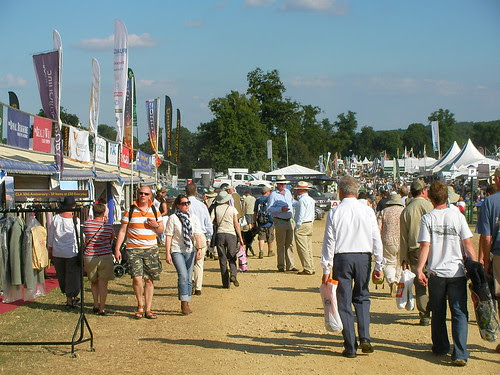 Sporting Shooter had a great three days at the CLA Game Fair at Blenheim - three days of blue skies, scorching temperatures, and a constant throng of readers around the stand keen to meet the team, including Robert Bucknell, Diggory Hadoke, Vicky Payne and Mike Yardley. We sold a shed-load of subscriptions, which will keep the bean-counters happy. And we had a great time. 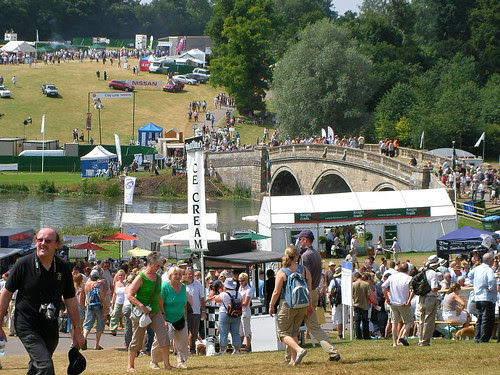 The CLA have issued a jubilant press release stating: "a record 151, 000 visitors attended over the 3 days an increase of 13,000 over the previous of 138,000. The sun shone, business was buoyant and the atmosphere convivial and happy."

Things became especially convivial and happy after a few beers on the Saturday night, culminating in this classic karaoke performance starring several leading lights in the world of airgunning:

The Sporting Shooter team (& camp followers) were camping behind the stand, enjoying the finest cuisine and luxury sleeping arrangements: 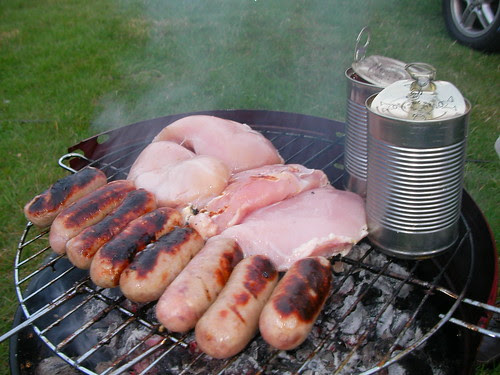 It was good to catch up with many old friends in the trade and the wider sporting fraternity, and there were plenty of interesting new products about, including this lovely new hammer gun from ASI... 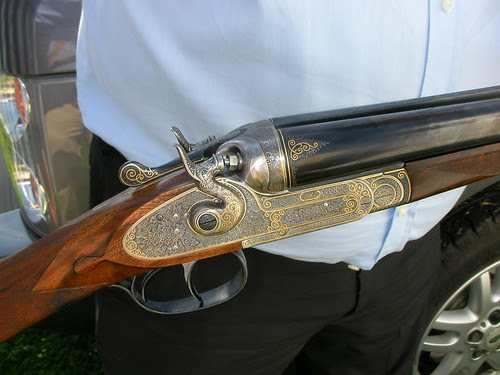 ...and a new lithium battery from Deben that weighs a fraction of the standard lead-acid type. It's not cheap, but it's going to make lamping a whole lot less tiring! 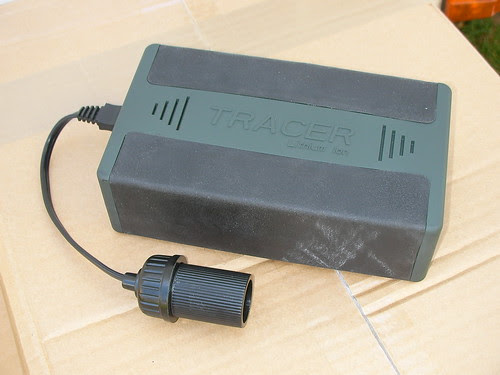 All in all, a great Game Fair, and a fitting event to mark the 50th anniversary, after the disappointment when last year's event was washed away by freak rain.
Posted by James Marchington at 15:11 1 comment:

Come and see us at Blenheim! 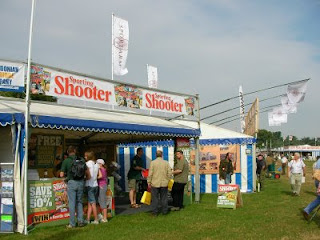 We're at the CLA Game Fair at Blenheim, nr Oxford. Stand no P1549 on Gunmakers Row. Drop in and see us!
Posted by James Marchington at 09:21 No comments:

All in a good cause

OK, so it's nothing to do with shooting, but a mate of mine, Phil, and his girlfriend Nicola are embarking on an epic motorbike journey round the UK on 3 August to raise money for cancer research. They plan to travel 3,300 miles through 30 counties in 12 days.

More info and an itinerary here. If you're on the route, do look out for them and show your support with a wave and a toot. And feel free to boost their fundraising effort by making a donation here »
Posted by James Marchington at 17:00 No comments: 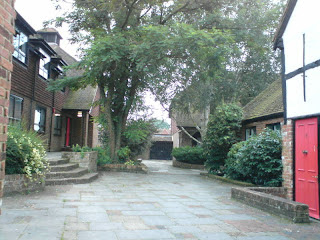 We moved in yesterday, phones and computers all up and running, now I just need to track down our photo library, which missed the van!

Posted by James Marchington at 08:41 No comments:

The Warrener foxshooting on the BBC Check out this video on the BBC website. If nothing else, it proves that the BBC isn't institutionally anti-shooting, and that if shooters feed 'em a good story, they'll use it.
Posted by James Marchington at 08:57 No comments:

So now it's ok to shoot a burglar

...according to this story in the Telegraph. I'm not sure I'd want to be the test case though - how long would my shotgun certificate last?
Posted by James Marchington at 23:42 No comments:

I've heard of keepers encouraging Eagle Owls because they have a habit of eating sparrowhawks. Seems they can help clear up ground vermin too! Telegraph story here »
Posted by James Marchington at 13:32 No comments: 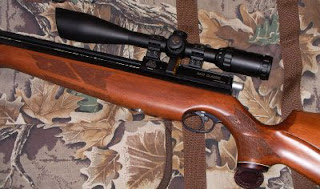 Today I've been out with a new Air Arms S410 airgun - and what an airgun! I've had very little experience with pre-charged pneumatics, but I was seriously impressed with this one. It's a .22, takes a 10-shot magazine, and the reservoir is a cylinder under the barrel (with a pressure gauge in the fore-end).
I've fitted it with a Nikko Stirling scope, and used one magazine of pellets to zero the combo at 25 yards, then went out after rabbits. Result: five bunnies and a pigeon, all killed stone dead with a single shot each, at 15-35 yards. The pellet below is a Bisley LRG, recovered from the pigeon when I breasted it tonight. It has struck bone and been rather deformed, but you can clearly see the rifling marks. 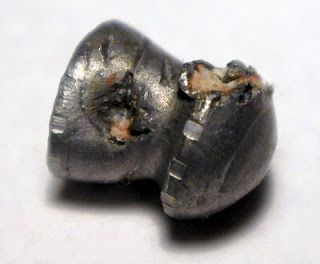 I'll do a more thorough review of the S410 in due course, but after my first experience with the gun I fear it may be a bit biased!
Posted by James Marchington at 23:33 No comments: 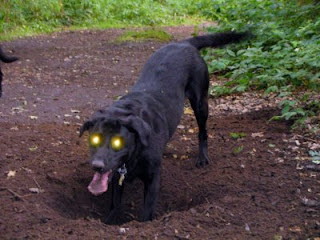 Skye the lab just loves digging - I think she's after moles, but she's never found one yet. I snapped what I thought would be an amusing pic of her mid-excavation, but the flash bounced back and the result was this scary-eyed devil-dog!
Posted by James Marchington at 16:56 No comments: 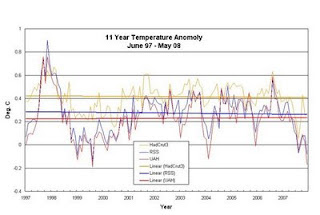 I thought everyone had come to accept Global Warming as a given, but scepticism lives on.
Posted by James Marchington at 09:17 No comments:

Ok, so here they are. The two eldest (by 9 days) are sisters, and are easily distinguished by their dark colouring, with white front paws and a cream bib. Telling them apart is something else. The only difference I've been able to spot is that one of them has a tiny fleck of grey on the top of her head. They are very similar in character, but 'no grey fleck' is slightly more aggressive and inclined to nibble your fingers when she's had enough of being picked up.

They are both super-friendly, and get very excited when the hutch is open, flinging themselves at the opening and climbing out so fast it's almost impossible to get them back in again and shut the door without risking trapping one. That and their tendency to nibble hasn't endeared them to the kids, who have retaliated by not giving them names. 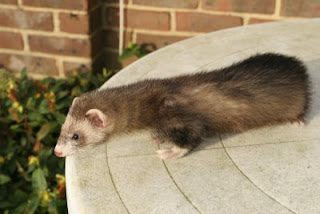 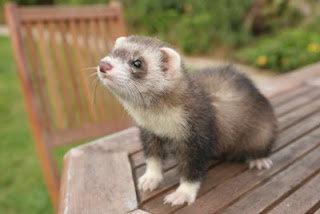 The other two are younger, and are also sisters (of each other, not the other two). This one - below - (which the kids have named "Pop") is a lovely silver colour, although she is darkening up as she grows older. She is the meekest of the 4, and it's easy to imagine that she's being bullied by the others as she tends to lurk inside the nest compartment when I open the hutch. Watching them play, though, it's clear that she is a little troublemaker, jumping on the others and nipping them to start a play fight. 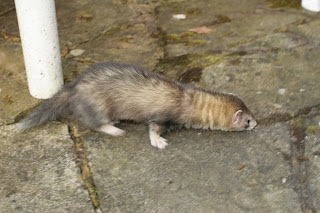 Pop's sister - below - (named "Panda" by the girls) is the darkest of the 4. She has no white paws or bib. She is earnest and inquisitive, and may turn out to be the most conscientious worker of them all. 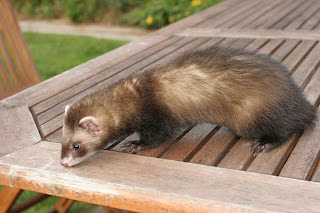 I am making sure to handle all the ferrets as often as possible, usually twice a day, in the morning before setting off for work, and again when I get home. This means that I have a distinctive odour, and get some funny looks from my fellow commuters on the train.

I top up their food and water at the same times. At weekends, of course, there's time to handle them more often, as well as cleaning up the mess - not just the obvious, but the food they dig out and throw round the hutch, and the bedding they've dragged out into the rain, which has turned into a soggy mush.

I'm feeding them on James Wellbeloved (20kg bag for about £45 here - if you know where to get it cheaper please let me know!). For water, I'm using a standard rabbit-type drinker, which has the advantage they can't knock it over or try to swim in it. 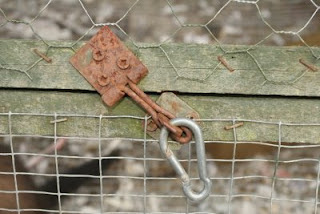 From previous experience, I know how easy it is to fail to lock the hutch properly, so I've used these spring clips which can't fall out. 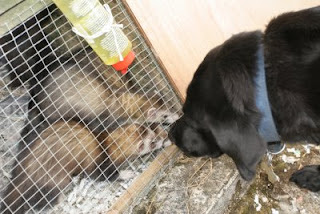 Skye the lab is fascinated by the ferrets, and they by her. If they ever manage to meet up without the wire between, all hell will break loose!
Posted by James Marchington at 20:42 1 comment: 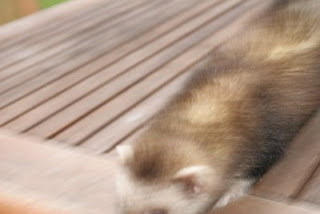 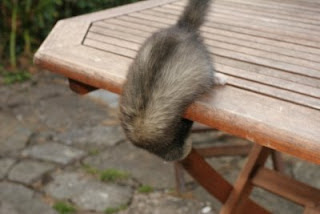 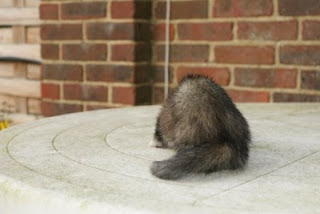 The hysteria around knife crime is reaching fever pitch; now it's an "epidemic", and magistrates are to be told to hand down the "most severe" sentences.

It all sounds so reasonable doesn't it? After all, we all despise knife crime, and would like to see knife-wielding thugs put behind bars.

But will this new tough line actually make a difference? Or will it just mean that police take the easy route, and nab a few harmless country folk to boost their statistics? Perhaps a few innocent countrymen banged up are seen as "collateral damage" that's worth it for the greater good?

I'm specially alarmed by the following quote from this article in The Guardian:

'Two factors can be taken into account in deciding a bottom of the range sentence: that the weapon was only carried on a temporary basis, or for a legitimate reason, such as in the course of trade or business...'

So, if I'm carrying a knife for a legitimate reason, I can expect to get off with only a light sentence??!

You'd think that decades of experience with firearms controls would have taught the authorities that vilifying an inanimate object does nothing to combat crime.

Still, I suppose it makes it look like they're doing something about it when The Sun comes to write the next day's headlines. Cynical? You bet!

There is one bright side to all this. If the cops are so busy checking me for knives, perhaps they'll forget to treat me as a suspected terrorist for carrying a camera.
Posted by James Marchington at 12:39 1 comment:

Visiting a friend's for dinner, I spotted this Minosharp knife sharpener in the kitchen. I'm always interested in knife sharpening gadgets, although I'm usually disappointed. Not this time! I tried it with a little pocket knife I had with me - and the results were superb.

The Minosharp is made by a Japanese company, and is sold for sharpening those fancy Japanese cooks' knives such as Global. It consists of a plastic handle, with two ceramic wheels set in a shallow water bath.

You put a small amount of water in the bath, replace the clear plastic cover, and put the knife blade into one of the guide slots. Then move the blade back and forth in the slot. The slot holds the blade at exactly the right angle to the ceramic wheel, and the wheel turns so that the water is applied automatically.

There are two wheels - one coarse and one fine. Give the blade a few strokes on the coarse wheel first, then the fine one. Result, one very sharp knife, with the minimum of metal removed from the blade. It's virtually foolproof.

This sharpener won't work on knives that are ground on one side only, or on serrated blades. But for a regular knife blade, it's magic, and at under 20 quid it's good value. I'm off to get one on ebay! 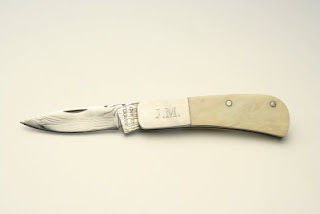 Oh, and the knife I tried with the sharpener - it's a lovely little pocket knife by British knifemaker Mick Wardell. The blade is only a couple of inches long, and has a lovely wood-grain type pattern in the steel. GunMart editor Pat Farey, who gave me the knife several years ago, had my initials engraved on it. It's a little beauty, I think you'll agree.
Posted by James Marchington at 11:33 No comments: It's shocking to realise that schools are allowing animal rights nutters Animal Aid into the classroom to poison the minds of young kids see their 'become a school speaker' page.

Does your shoot organise any talks or shoot visits for local schools, to show them how things really work in the countryside? If so, do let me know, as we'd like to feature some examples in the magazine.
Posted by James Marchington at 09:05 3 comments: