With continuing harsh weather, BASC is calling for all shooters in Scotland to exercise 'extra voluntary restraint' in their shooting of ducks, geese and waders including woodcock, snipe and reared mallard.

If the weather conditions persist until the New Year in Scotland then it is possible that a decision will be taken by the Government to impose a statutory suspension of waterfowl shooting which would last for up to 14 days.

All of which means that my planned wildfowling trip to NE Scotland in the new year is looking less and less likely to happen. Which will be bad news for the local pigeons and foxes.

Today (31 Dec) was day 11 in the countdown to a severe weather suspension of the shooting of ducks, geese and waders in Scotland. The hard weather is expected to persist and if it does the Minister will sign the Order on Saturday 2 Jan, coming into effect on Monday the 4 Jan at 09.00.
The ban will affect the shooting of all ducks (including reared ducks), geese and waders (including snipe and woodcock) and will be signed for 14 days. However, there will be a review after 7 days and if mild weather has arrived it could then be lifted.

Today the environment minister Roseanna Cunningham signed the order, which brings a suspension into force on Tuesday 5 Januar. The suspension last up to two weeks, but is reviewed after seven days if conditions have improved.

This is the first cold weather suspension since January 1997, when the order covered the whole of Great Britain. The last time such a ban was enforced in Scotland alone was in 1993.

Posted by James Marchington at 21:47 2 comments:

I've been making the most of the sunshine, and a couple of spare hours, to shoot some of the obligatory cute puppy photos. Bracken is 12 weeks now, and if I don't get on with it she'll be a big hulking brute and I'll have missed the chance! More photos in my collection on Flickr here...
Posted by James Marchington at 12:37 2 comments: 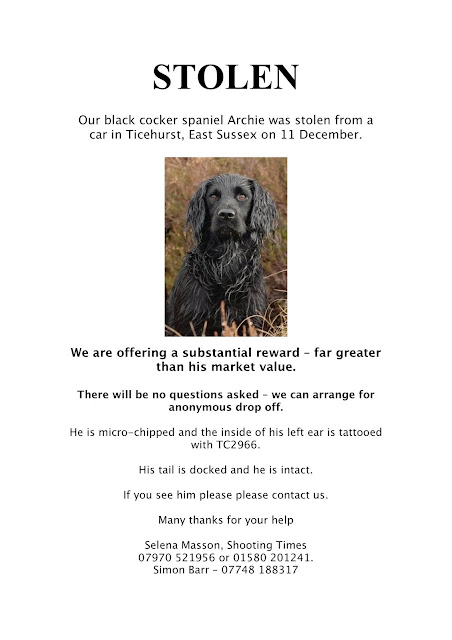 Posted by James Marchington at 09:33 No comments:

I've been psychoanalysed by an anti

I woudn't normally suggest you go and read anything from the League Against Cruel Sports. But the latest confused ramblings from their chief fruitloop, Douglas Batchelor, are worth a look, if only for a glimpse into the sort of poisoned mind that can look at a day's shooting and see perversion and cruelty.

As an example of cod psychology, it's a classic. To summarise several hundred words, he says: i) I don't understand what people see in hunting and shooting, ii) Therefore they must be very sick, and so iii) They should be banned.

Along the way he denies the antis' favourite criticism that shooters and hunters are posh (has he told Animal Aid? They're still plugging that one). He tries to imply that we're perverts with an unhealthy interest in 'dominance' (dread to think how his mind arrived at that one). And he suggests that encouraging young people to take up our sport will turn them into mass murderers.

It's so obviously bonkers and irrelevant that I'm amazed anyone takes him seriously. Unfortunately for the BBC, they're supposed to show 'balance', which occasionally means finding someone to put the antis' case - and they're not exactly spoilt for choice.
Posted by James Marchington at 20:49 No comments:

Shooting ourselves in the foot

Two phone calls this afternoon have highlighted the fact that some shooters don't do themselves - or the rest of us - any favours.

The first was from a council employee in Leeds, who had shot from a nearby pheasant shoot rain down around him as he worked. He was the most reasonable bloke imaginable, but understandably concerned and wanted to know the legal position. I suggested the best bet was a quiet word with the shoot captain, but apparently local residents have complained before and got nowhere.

The second was from an RSPB worker in Northern Ireland. A while back I emailed him asking about the latest report of a poisoned red kite. Was he sure shooters were involved, I asked. After all, there are other people who might have cause to put down poison. But no, it seems he generally finds shooters and gamekeepers very helpful - but in this case the keeper is an oldfashioned sort who sees buzzards and kites as his enemies.

It only takes a few people like this to undo years of good work by the rest of us. The frustrating thing is, it's not our job to police them, we don't have the powers to do so - and yet we're the ones whose names get dragged through the dirt.
Posted by James Marchington at 15:48 No comments:

How about Highland venison, Yorkshire grouse or Norfolk pheasant? The EU has a scheme to protect traditional and regional food specialities. The latest regional food to gain special protection in this way is Cornish sardines (also known as pilchards). They won their special status because of the traditional way they are caught, and Cornwall's historic link to sardine fishing.

The UK, with 40 products recognised by Brussels, lags a long way behind France and Italy, with around 300.

Are we missing a trick here? Are there regional game specialities that could win special status, recognising the traditional way they are harvested and prepared?
Posted by James Marchington at 13:07 1 comment: 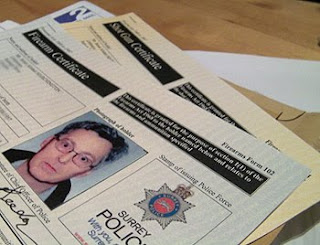 Full marks to Surrey Police, who have processed my RFD, Firearms and Shotgun Certificate renewal with all the efficiency and courtesy one could wish - despite a photograph that makes me look like the sort of person who shouldn't be allowed within a mile of a gun! The certificates all arrived in the post yesterday, so there's no awkward gap between one certificate and the next. Silly really, but it's surprising how much worry the whole process causes, and it really helps when the police firearms dept handle it well.

And yes, I did remember to sign them both, in ink, on receipt. From my gunshop days, I recall it's surprising how many people don't!
Posted by James Marchington at 09:46 No comments: 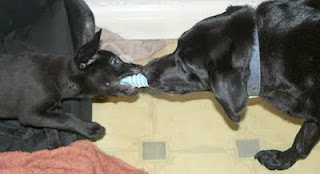 This is not the recommended way of training a young gundog, but it's good to see the two of them playing together!
Posted by James Marchington at 21:00 No comments:

Young shot on the telly 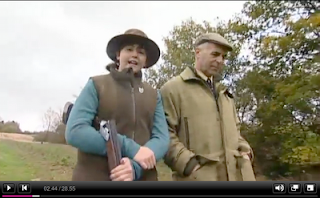 The BBC's Inside Out South East programme has produced an excellent piece on young people and shotguns, featuring the West Kent Shooting School, and presented by a young shooter, 12-year-old Victoria. It's available on the BBC iPlayer until Monday 14 Dec - grab a look while you can.

UPDATE: There's a 'debate' piece on the BBC  Kent website about this, with BASC's Jenni Thompson making the case for youngsters being encouraged to learn shooting responsibly, and the League Against Cruel Sports' Douglas Batchelor frothing at the mouth (and showing a complete lack of knowledge of the law on young people and guns - or is he deliberately trying to frighten people?).
Posted by James Marchington at 20:41 2 comments:

Two foxes snapped by the ProStalk 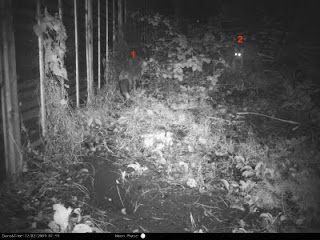 For the first time, the ProStalk camera has captured two foxes at once. 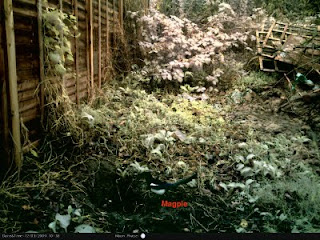 Also a magpie that visited the site during daylight. There are one or two 'blank' photos, day and night, which I guess are the result of something whizzing past the sensor and being out of shot by the time the shutter opens. It could easily happen with a small bird, or even a bat, flying close to the camera.

It's a hard life 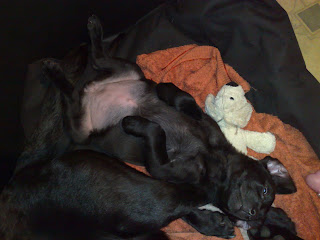 Posted by James Marchington at 21:19 No comments:

Look who's sitting outside the office window this morning

I opened the window quietly, poked the camera through, and snapped a few photos before the woodie flew off.
Posted by James Marchington at 10:01 No comments: