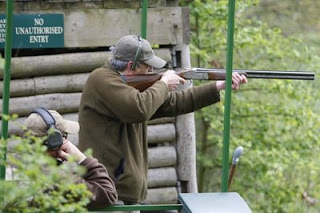 ... I was rather chuffed today to take the High Gun prize at Musto's prestigious annual press shoot, at the excellent West London Shooting School.
To keep me from getting big-headed, I'll admit that I had to phone Mike Yardley and eat my words. Just last week I told him "yes I know those Caesar Guerinis are very nice guns, but I just can't seem to shoot well with them". And today... I borrowed one of the shooting school's guns - a Caesar Guerini! 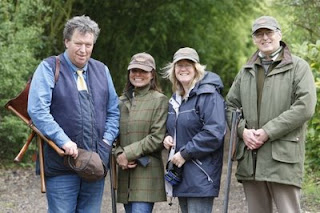 OK, that's enough blowing my own trumpet. Normal service will be resumed shortly. 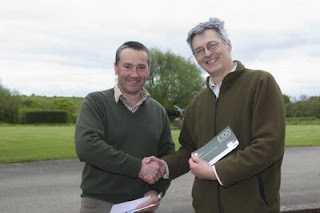 Shoot radios - what do you use?

There's no escaping modern communications. Even in the wilds of the Highlands, I can usually be reached by mobile phone if the caller is determined enough. That's a big plus for safety, of course, because it means there a good chance I can call for help if, say, I slip and break a leg.

And for shoots, estate workers, stalkers and the like, communications are a vital link between staff - which might mean the stalker calling up the pony boy (more likely Argo driver these days), the keeper checking the guns are in position, etc, etc.

There's a confusing array of equipment and technologies on offer, but what works best? It depends on your needs, of course. Plenty of lowland pheasant shoots manage fine with cheap, high street PMR446 radios; some of them just use the old-fashioned hunting-horn or whistle. Pigeon shooters chatting from hide to hide often use their mobile phones.

But for more demanding applications you need something altogether more robust and reliable. Until recently that meant going the route of a commercial 5W licensed system, using something like the IC-F15 series.

Recently, though, Icom have come out with an upgraded Digital PM446. It did well in a recent Gadget Show test (click here to view the video). For shoots that don't need the full licensed radio solution, this could be just the job.

What shoot comms do you use and why, and how good is it? Let me know by posting a comment below...
Posted by James Marchington at 16:09 No comments:

If you detect a rebellious mood in my postings today, perhaps it's because I've been listening to Show of Hands, a West Country folk duo with a powerful message about Britain's countryside and roots. Any band with tracks like 'Longdog' and 'The Keeper' have got to be worth a listen. The following videos, 'Country Life' and 'Roots', give a flavour of their music. If you like it, find more at their myspace page, and website.

Posted by James Marchington at 12:01 No comments:

Well done BASC! They've told Leicestershire police to go back to the drawing board with their ludicrous plan for shooters to 'voluntarily' call in every time they're going shooting.

The police are suggesting that the scheme will reduce the number of false alarms when armed police response units have to check ‘sightings’ of people with guns.

BASC's John Swift said: “This is a half-baked idea that must be given much greater consideration."

I'd go further. This is a plain stupid idea which should be given no further consideration. It would set a dangerous precedent, encouraging police to believe that we are shooting by their leave. It would also encourage them to turn out the full terrorist response to any shooter with the temerity to pot a rabbit without asking their permission notifying them first.

Do the cops actually have the first idea just how many people go out shooting, often unplanned and on the spur of the moment, every day (miraculously not causing murder, mayhem and terrorist incidents while they're at it)? Do they seriously want everyone to call in at 9am each day to say "I might spot a rabbit eating my cabbages at some point during the day, in which case I shall be sneaking out the back door with my air rifle, so don't send the helicopter after me"?

Shooting is a normal, legal, everyday activity in the countryside, carried out by responsible, law-abiding people. I don't see why I should have to call the plod and ask permission, any more than I should ask them if it's ok to drive my car down the road (cars are used by organised criminals and terrorists you know), dig a hole in the ground (could be burying a murder victim), make a phone call... you get the picture.

In any case, it seems that calling the Leicestershire plod and warning them about your plans is pointless anyway. Val Worthington phoned to tell them about her cowboy-themed party in Castle Donington in February - and still got raided by a helicopter and four police cars! Story here... A 'police spokesman' trotted out the tired old line: "We have a duty to treat all reports of firearms as genuine." Indeed you do, and you have a duty to maintain a sense of proportion, and not wet your pants every time you hear the word 'gun'.
Posted by James Marchington at 09:49 4 comments:

An 'overwhelming' 10,000 people have signed a petition against snaring, according to the latest rubbish from the LACS. We've exposed their misleading, emotive twaddle before – here and here, for instance.
Just how 'overwhelming' are 10,000 people? More than 150,000 attended last year's CLA Game Fair alone. And how hard can it be to get gullible, well meaning members of the public to sign a petition to save the ickle animals? I could rustle up a hundred signatures in an afternoon standing outside my office door, spinning some yarn about animal suffering, from people who wouldn't know a snare from a Larsen trap, or a stoat from a weasel.
Sorry LACS, your feeble 'petition' is worthless. If you want to protect wildlife from cruelty, how about a campaign to ban the keeping of domestic cats?
Posted by James Marchington at 22:22 1 comment: 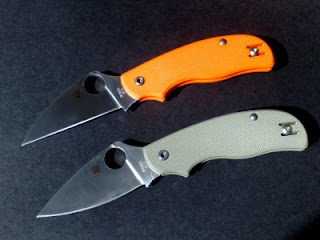 The Easter Bunny, in the form of Joyce Laituri of Spyderco, has delivered a couple of lovely little UK-legal Spyderco pocket knives for me to try out.

These are the C127 'Urban' knives, designed to be 100% street legal in the UK (ie sub-3" blade, and no lock - although I seriously doubt that the 'non-locking' requirement will stand up in court when it eventually comes to a test case, I just don't want all the bother and expense of being that test case).

These are good looking, practical and rugged little knives. The orange one has a Wharncliffe blade (straight edge), while the drab green is a leaf shape blade, both flat-ground. Both knives click open very positively, and they're designed so your index finger blocks them from folding in use. Still not as safe in use as a proper lock knife, but the folks who make our laws weren't worrying about our safety when they dreamt up that one.

I particularly like the orange colour scales, which should show up well when I drop the knife in the woods.

One tiny disappointment: my Spyderco C94 UK Penknife has the words 'Golden, Colorado, U.S.A. Earth' engraved on the ricasso, which I've always thought is rather cool in an understated way, suggesting that I might do a spot of moonlighting as an astronaut. On the C127s this is replaced with the words 'Seki-City, Japan', which don't have the same adventurous ring to them. This does mean, though, that the blade steel is first class, and will hold a superb edge.

I'll give these knives a thorough testing (tough work, this outdoors journalism, you know) and report back.
Posted by James Marchington at 14:48 1 comment: 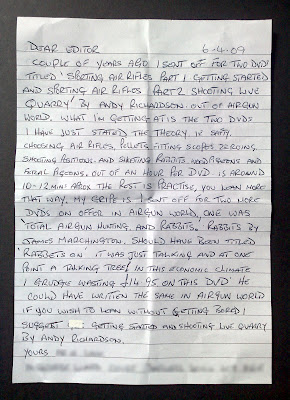 There's nothing like a reader to stop folks like me getting airs and graces. This letter arrived today, ticking me off for talking too much in my Rabbits DVD, unlike that fine fellow Andy Richardson (oh, how he will pull my leg over this one!) who gets on with the job...
Posted by James Marchington at 14:17 3 comments:

First of the fox cubs 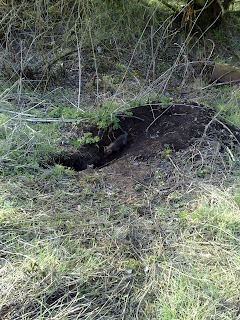 Russ from Blackburn in Lancs has sent in this photo of the first fox cubs he's spotted this year, seen as he walked round his rough shoot. 'They're no bigger than kittens, so no real threat to the lambs yet,' he says. Not directly, agreed, but I suspect their parents may be!
Posted by James Marchington at 15:36 No comments:

Filming in the dark! 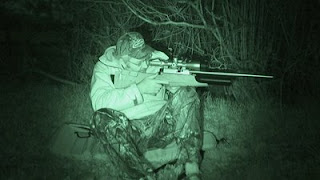 I was out well before dawn with Terry Doe today, filming for our next airgun DVD. Filming in the dark requires some special gear - this was shot with an infra-red floodlight, and the night vision attachment on the camera. Curiously, Terry's jacket has come out as a plain, light colour, although in fact it's camouflaged like his trousers, as you can see in the photo below. Funny how different wavelengths of light make things look very different. Worth remembering before you throw all your hunting gear in the wash with 'whiter than white' detergent full of optical brighteners! 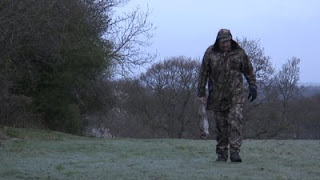 Dawn is always my favourite time to be out. As the sun rose, a few rabbits came out to feed, and I managed to capture a couple of kills on video. We saw a host of wildlife, including a fox, buzzards, rooks and jackdaws, and dozens of small birds from blue tits to chaffinches. A good outing, and plenty of good footage in the can. Can't ask for more than that.
Posted by James Marchington at 15:22 1 comment:

I'm a big fan of Spyderco knives (I've written about their UK-legal penknife here before) - so I made a beeline for the Spyderco stand at the recent IWA show in Nuremburg (more on that show in the current issue of Sporting Shooter - plus a few of my photos on Flickr).

Sadly I missed Joyce Laituri, their Golden, Colorado based marketing manager, who I used to be in regular contact with during my time on Gun Mart magazine. But I did pick up a copy of their press pack (rather splendidly supplied on a neat little USB stick that screws up into a tiny key-ring canister thingy).

And what should I find inside but a photo of this wonderful looking Bushcraft knife. Joyce tells me it's not out yet - but should be released soon. I'm hoping to persuade Joyce to let me have one for a review in due course, so watch this space!
UPDATE: Thanks to Surburban Bushwacker for pointing out there's some background to this knife's development here on the Bushcraft UK forum:
Posted by James Marchington at 15:26 1 comment: 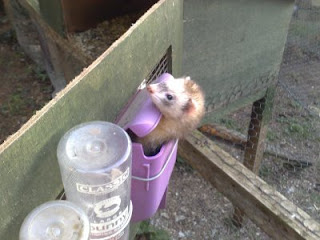 And I thought pheasants were suicidal! This silly ferret got stuck trying to escape via the food hopper. I've had to cut the feeder apart to free her. Now to rebuild the hutch...
Posted by James Marchington at 19:12 1 comment: