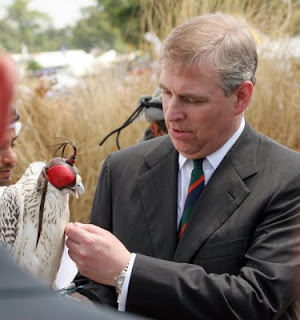 Today I visited the splendid 2nd International Festival of Falconry, at the Englefield Estate near Reading in Berkshire. It's a fabulously colourful spectacle, with falconers from all over the world flying in to demonstrate their art and take part in the Parade of Nations in the grand ring. More photos on my flickr page.
I saw HRH Prince Andrew presented with a male gyr falcon by His Highness Sheikh Sultan Bin Tahnoon Al Nahyan, Chairman of Abu Dhabi Tourism Authority (try saying that fast three times!). And I bumped into all sorts of folk who I normally wouldn't see from one year to the next. All in all, a great day out. 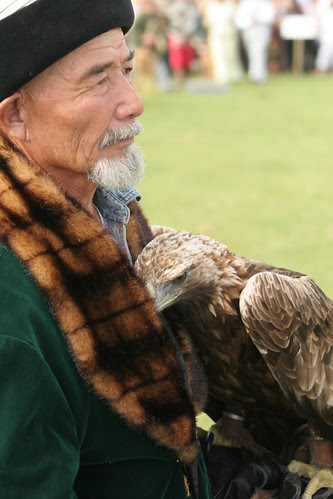 One thing always strikes me about falconers in this country. When it comes to presenting an image that's acceptable to the public, they just 'get it', in a way that so many shooters and hunters don't. On Friday, they invited 500 local schoolkids to visit the show and learn about birds of prey and falconry. They also invited along Chris Packham, star of BBC Springwatch and darling of the conservation lobby.
These guys are even making a submission to UNESCO for falconry to be recognized as part of the world’s intangible cultural heritage. Shooting could learn a lot from them. 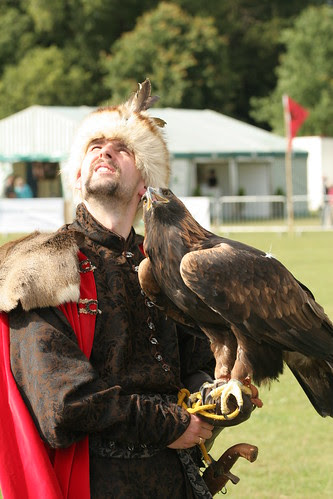 Here's something else I noticed about falconers. They look at the sky. Most people just walk about, looking at ground level. Falconers are constantly glancing up at the sky. This chap was posing for photos when something caught his eagle's eye, and he instantly followed its gaze. A moment later I looked too. Couldn't see a thing! Just blue stuff with clouds floating in it.
Posted by James Marchington at 20:53

Great comments and photos about the falconry festival. Thanks for posting them.

Why is it the pubic see hunting with a hawk as natural and good but not hunting wih a gun? Does a falconer not 'stress' the quarry as much as the rough shooter? After all both may use a dog to flush the quarry...
Looks like an excellent show. I never stop being impressed as the partnership between non-domesticaed birds and man hunting in partnership. Beautiful.