This press release from the RSPB puts shooters at the top of their 'blame list' for attacks on peregrine falcons. To be fair, they also list other groups who might go after peregrines or their nests: pigeon fanciers, illegal falconers, and egg collectors.

It's no secret that peregrines are a major problem for people who keep racing pigeons. Check out this thread on a pigeon racing site - the picture below (linked from their forum) shows some of a claimed 6,000 pigeon leg rings found beneath just a handful of peregrine nests, and dark mutterings about birders hiding many more. These people are angry about the RSPB's uncompromising protection of peregrines, and it's clear they feel like taking the law into their own hands. 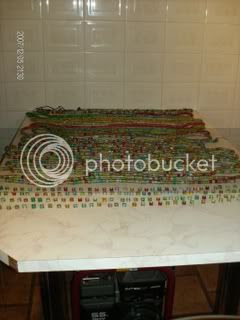 "The picture of those rings turns my stomach, i wish the r.s.p.b. would protect our pigeons as much as those with hooked beaks, or at least allow us to" says one fancier. "I want to watch them [the peregrines] cook" says another. In another exchange a fancier posts "rspb won't do anything"; one replies: "Unless we do it." 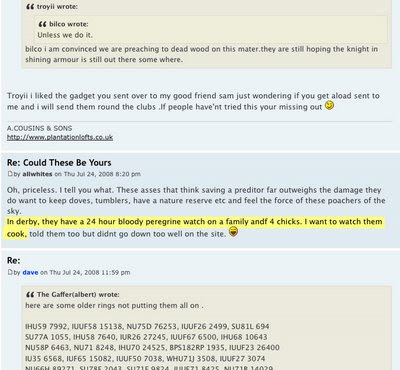 In another post on the same forum, one fancier admits: "I moved here in 2004 and May to September 2004 to 2008 every day up to 4 peregrine falcons attacked my youngsters. I offered the peregrines some indigestion medicine (white powder) during winter 2008/2009 and am enjoying watching my youngsters ranging the skies in peace so far this year." 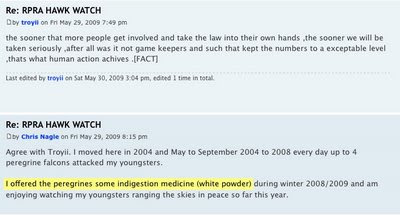 Most keepers I know would be thrilled to see a peregrine about the place. I can't believe many peregrines come to grief at the hands of gamekeepers. Even if they were tempted, it would be too much risk and effort for too little gain. The pigeon racing community, on the other hand, hate these birds with a vengeance, and with good reason.

Unfortunately for us, pigeon fanciers don't make such a good bogeyman for the RSPB to slag off in its press releases. Pigeon fanciers are bird-lovers too, and it would force the RSPB to confront the uncomfortable truth that some birds eat other birds, and you can't protect them all equally.
Posted by James Marchington at 08:38

At last someone has brought this up !! about 15 years ago in Windygates, Leven and Methil loads of cats were poisoned by whom ? well it was not Gamekeepers!

Maybe the RSPB could make tofu prey birds for the predators? Or train them to only catch animals we don't like such as mice,rats and mink?