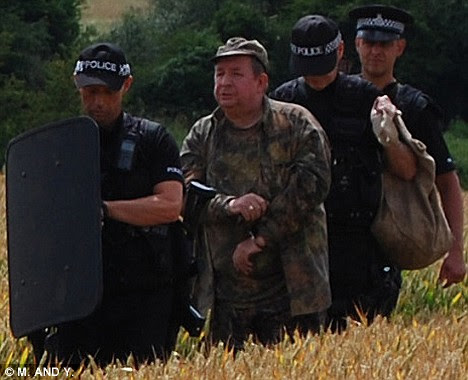 Photo from Mail Online
Ok so I'm jumping the gun, as it were, because the facts of this case are still very unclear - and clouded by the hysterical, inaccurate and downright incompetent reporting of the mainstream media.

But this doesn't sound like a 'vigilante' to me. On the face of it, there's a very simple explanation. Some pesky crop-circlers tramp all over a farmer's field. It ain't big and it ain't clever, but it happens.

You settle down with your flask and sandwiches. Things start to hot up, as the birds come in. You've just taken a nice right-and-left when - what's this? A bunch of hysterical Norwegian women appear from nowhere, right in line with where you're shooting. Bloody fools! Don't they know they could get hurt? They've no right to be on the place anyway.

"I have been visiting crop circles for a decade and have in various ways been told that we are not welcome." Eva- Marie Brekkesbo, 47 (or 52, depending what paper you read). I bet you have. Any chance of you getting the message?

So you step out of your hide and tell them to clear off, in no uncertain terms. For their own safety, and because you're a bit narked that they're frightening off the pigeons.

"The gunman was dressed in full camouflage garments, had a black mask over his face and held a gun in his hands" said Eva- Marie. Oh, like a pigeon shooter then?

And then things go from bad to worse. A bunch of gung-ho cops show up, complete with helicopter, stupid shields and flak jackets, the whole works. You get the full treatment, led off to the nick in handcuffs, locked up for hours and accused of all sorts of nonsense.

"With the help of an observation helicopter that was in the area officers swooped in to stop the gunman." Gosh, how exciting for them. Cos they can't afford to take chances these days, oh no.

Your day is ruined, and goodness knows if they'll ever let you shoot again. What a nightmare, and all because of a massive over-reaction by a bunch of people who clearly haven't the foggiest idea what the countryside is for.

There, but for the grace of God...


For the edification of policemen and journalists, here is a handy pictorial guide. One of these is a 'masked gunman', the other is a harmless pigeon shooter, exercising his right to conduct lawful pest control on private land without being treated like a terrorist. Can you tell which is which?

Posted by James Marchington at 14:47

Real crims actually shoot at people, much safer to keep the stats looking good (and the budget topped up) by harassing the law abiding, they don't shoot at you you see.
SBW

GRRRRRRRRRRRRRRRRRRR
I am getting sick of this country.
Did the police mention to he stupid women they were trespassing?