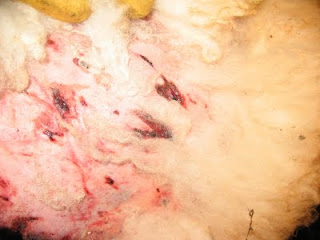 My informant from Wales has called to say that his local big cat is active again - three sheep killed last week, and another this morning. (Previous post on this subject here)

Locals have heard 'screaming' at night, and the sheep have all been killed in a distinctive manner, quite unlike the work of rogue dogs etc. Some of the sheep have been so thoroughly eaten that only a fleece and stomach contents remain in the morning - it takes some creature to do that in a night!

Big cats tend to drag their prey up into a tree, whenever possible; clearly this isn't happening here. They also favour woodland, however sparse, for their lair; is there somewhere in the vicinity that could provide such cover? If so, a series of 'sandpits' dug where the animal would have to exit might provide a clue.

One big cat (however big) couldn't possibly eat a whole sheep on three consecutive days (Thu, Fri, Sat) and why would it kill again on Sunday, but not eat the carcass? Maybe 'it' was disturbed, but the clue is in my putting 'it' into inverted commas ie is 'it' in fact 'them'? A mother with kittens perhaps. The fact that the ears have been chewed could indicate kittens hanging onto the ears trying to emulate their mother during the attack, or chewing on them prior to being given permission to feed off the main carcass. This is becoming a might fanciful, though.

Another thing about eating raw flesh is that it takes 48 hours to go through the system as opposed to 24 hours with cooked flesh; ask the kennel huntsman of any pack of hounds. So eating raw flesh on consecutive days doesn't make sense.

Why did it leave the stomach contents? Most carnivores value greatly the partially digested herbage found in their victims' stomachs. It helps to provide necessary roughage without the need to graze actual blades of grass for which their teeth are poorly suited.

Blood in the ears and frothy blood in the mouth might suggest death by strangulation (or lung damage) a vet would be able to tell you better than I, so almost anything could be responsible for that, even a mink might manage it.

Pugmarks are particularly difficult to find unless sand or mud has been crossed. Even then, it takes an experienced eye to identify them positively. If there are any, it might be helpful to note that cats can withdraw their claws when walking (and extend them when attacking) so the lack of claw marks could be an indicator, but by no means foolproof.

I once tracked a cattle-eating leopard in Namibia for four hours along a dried up river bed and never once saw any sign of its claws in the soft sand. On another occasion on the Botswana/South Africa border I followed the pugmarks of a leopard along the muddy bank of the Limpopo for an hour and a half; this leopard's claws were evident all along the way. For reasons too long to go into here, I didn't shoot either of those cats, but I watched them often through my binoculars, so I do know what animal made those pugmarks.

Posted by James Marchington at 14:05

Wow what a story. I have seen big cats in Fife and Aberdeenshire. Mark who works with me was with a group of clients watched a roe being chased by a large black cat.

Why has no one taken DNA from these Welsh kills ?? This will prove one way or the other that there are large cats at large in the UK.

I have to say though Badgers will kill lambs upto 25kg ! if it is a Badger kill there will be fur on the rib bones.

Jeepers! I've seen very impressive films of a big cat in Shropshire farmland some months ago. I hope that this recent image from Wales means the beast is making its way AWAY from Staffordshire!

why did they take his guns?

From what I can gather, he initially thought it might be humans killing the sheep, and that's what he reported to the police. It appears that they thought he might be tempted to do something illegal, so disarmed him just in case. Slippery slope if you ask me.

So....how long before I say my neighbour is being a bit noisy and they take my guns....something is SERIOUSLY WRONG here!!!!!

Science fiction becomes reality. Precrime is with us.

Bit of news came through a keeper friend tonight whilst he was having a cup of tea with me. One of his friends has had his guns taken from him as he was caught doing 42mph in a 30 zone ! he has 30 days to appeal ?

This paranoia about guns is interesting isn't it? It's as if the problem these days is that people have no protection against their imaginations: if it's possible to imagine something, then there's an absolute need to defend against it the possibility, however slight and bizarre, that it might actually come about. In a way it's a kind of widespread mental illness...

Sounds more and more like a Badger attack to me !

Once the Badgers get their fill the foxes will clean up a lamb over night.