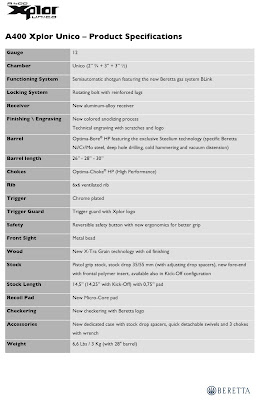 OK, following my previous post on the A400 Xplor Unico, I've clarified what I can tell you about the gun. So here (above) is the full technical spec sheet as issued at the press launch (click the photo for a larger, more legible version).

In a nutshell, it's a brand new semi-automatic shotgun from Beretta, with some very interesting new technical developments and striking new design - including an anodised green coloured receiver.

For me, the feature that really stood out was the ability to fire any 12-bore load, up to 3 1/2in and from 24g to 64g, without any adjustment. And I know it really does cope with those weights and anything in-between, because I've fired them (well, up to 63g anyway).

The fact that I am still standing up and have no broken bones is testament to another big feature of the Xplor - its recoil reduction system. This takes the established Kick-Off butt pad system and adds a third shock absorber in the stock bolt, giving up to 70% recoil reduction.

Beretta are making much of the action's speed - the Xplor is now, apparently, the world's fastest semi-automatic. In practice, I've never found a modern semi-auto that cycles too slowly for a second or third, aimed shot, so I haven't felt the need for more speed, but I suppose it can't be a bad thing.

Posted by James Marchington at 10:56