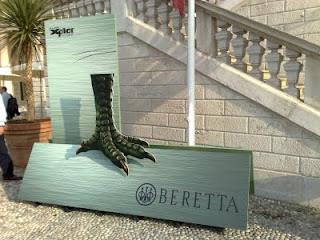 Today (8 Oct) I'm in Italy for the unveiling of Beretta's 'green monster' - the next thing in semi-automatics. Except I'm not allowed to show you a photo of the gun itself, or they'll feed me to the velociraptor...

UPDATE 9 Oct: OK, so I've shot the new A400 Xplor Unico, and it's very interesting. Beretta are determined to keep the details under wraps until the official unveiling on 1 November. They invited around 100 journalists from around the world for the pre-launch briefing in Brescia, and a chance to try the gun, and swore us all to secrecy. It'll be a real test of the sporting press's integrity - will anyone dare to break the embargo?


Actually it's not at all clear just how much info we are allowed to release. At the Q&A session at the end of the briefing, no-one thought to ask. We were all busy asking technical stuff like 'how much will it cost' and 'when will it reach the shops' and 'how does that bit work'.


But they did issue two high-speed photos with the instruction 'you are allowed to use only these photos before 30.10.2009'. So I guess it's ok to publish them here. If this blog disappears in a puff of smoke, you'll know I got it wrong! 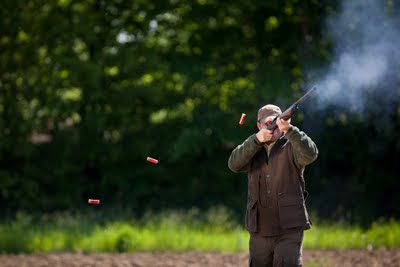 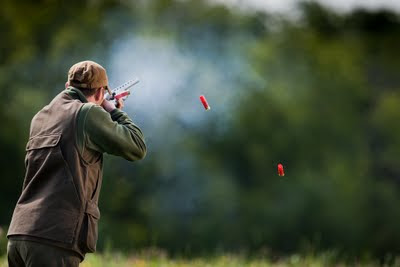 From the photos you'll notice that the shooter has managed to fire four shots remarkably fast - three shells in the air at once, and the next shot already exiting the muzzle. So, as an informed reader of this blog, you might infer that the A400 Xplor Unico has a very fast cycle. It won't have escaped your notice that the chap pictured is dressed more for hunting than clay competition, and you'll be drawing your own conclusions from that. And knowing Beretta's reputation for technical innovation you'll be guessing that they wouldn't have made the quantum leap in nomenclature from the A300 series to A400 without some fundamental changes to the mechanics.

And that's as far as I dare go at this stage. More info - and photos - as soon as I can.
Posted by James Marchington at 12:38