Mark Avery and the dead parrot 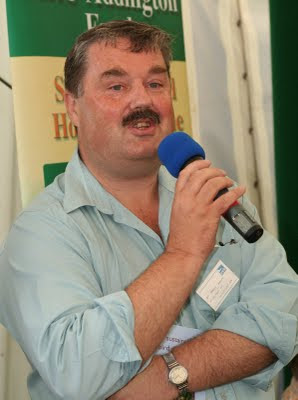 I do enjoy following the blog of RSPB conservation director Mark Avery. It's a real insight into the RSPB mind-set - and I'm constantly bemused by the knots these guys tie themselves in with their this-bird-is-better-than-that-bird approach to the environment. 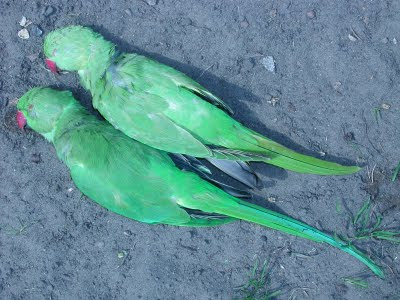 The latest muddle is over "the lovely ring-necked parakeet" being added to the list of birds that can be killed under General Licence. Birding types don't know which way to jump. It's non-native, and a threat to our native wildlife, so perhaps it should be wiped out like the mink (they seem to have no problem with the idea of exterminating mink with extreme prejudice: two legs good, four legs bad). But parakeets are birds, so perhaps they should be protected at all costs? Erk! It's a conundrum worthy of a Monty Python sketch.

When it comes to birds of prey, all logic flies out of the window, along with any chance of the birders comprehending the concept of wildlife management. Shooters get sterotyped as bloodthirsty killers, and the clamour for 'tighter regulation' drowns out all sensible discussion.
Just look at the RSPB's latest Birdcrime report, and see the huge fuss about "raptor persecution" (for which the numbers are actually down). There's hardly a whisper about the 746 incidents (62% of the total) which relate to non birds of prey. Are some birds more equal than others? It would appear so. Simon Hart of the Countryside Alliance has some good points to make on the subject - read them here.
As an aside, I'm amazed at how little we hear of the illegal trade in songbirds like goldfinches and linnets. Huge numbers of these lovely little birds are trapped and sold on the black market, and yet how often do we hear the RSPB campaigning about it? It doesn't appear on any of the lists of 'wildlife crime priorities'. I'm keen to follow this up in the magazine - any info on the trade, and the methods used by the illegal trappers, would be gratefully received, anonymity respected if you request it.
Anyway, back to the point: The General Licence system is a nonsense, made necessary by the nonsense that is the EU-driven bird protection legislation.
On the one hand we have the humble rabbit, which has been chased, shot, caught and eaten by man for thousands of years. Until recently the law placed an obligation on landowners to control rabbits, to reduce the damage to agriculture. Are rabbits remotely threatened? Of course not. And do we need some twisted law that says 'all rabbits are protected, except when we say they're not'? Of course we don't
And on the other hand we have the humble woodpigeon, which has been chased, shot, caught, etc etc just the same. Is it remotely threatened? Of course not. And yet each year we sit and chew our fingernails, wondering what ridiculous nonsense the government will have dreamt up. Will we even be allowed to shoot pigeons any more? Will we have to fill out a form in triplicate, proving that we tried offering the pigeons counselling, serving them with ASBOs, and still they won't stop eating the crops, so reluctantly we'll just have to shoot them?
It's a complete nonsense, a product of the confused protectionism that says four legs are bad, two legs are good, and two legs with talons are right up there with God.
Stalking high up on a Perthshire hillside last week, I was privileged to see a sea eagle (swooping after a pair of grouse we'd disturbed from the heather). We stood and watched through the binoculars, in awe of the magnificent bird.
Funny, I remarked to the stalker, that 'they' are busy introducing one deadly killer into the Highlands, while doing their utmost to exterminate another, the mink. 'Aye' he said, and shook his head. He's used to being dictated to by do-gooders who think they know his hill better than him - folk who won't let him burn a small patch of heather to stop the heather beetle because of rules to protect the very environment that the heather beetle is going to devastate.
In days gone by we managed the countryside like an allotment, encouraging nature to produce a surplus which we then harvested. Nowadays we treat it like a municipal garden, selecting our 'favoured' species for the flower beds according to their popular appeal. Everyone loves a raptor. Keep off the grass, don't pick the raptors. What's that non-native weed species doing there, get rid of it, it doesn't fit the plan.
Local people whose fathers and grandfathers created the countryside are no longer trusted to look after it; they're tied up with red tape, rules, regulations and certificates to ensure they've been brainwashed into accepting the 'approved' way of thinking. Independent spirits, eccentrics and characters are not tolerated.
Maybe that's why I find myself increasingly drawn to the wild places (and the wild people) where the dead hand of modern countryside management hasn't yet reached. Hopefully the tide will turn before it does, because we're in danger of losing something we don't even know we've got.
Posted by James Marchington at 16:35

I'm not so sure there is a 'muddle' James. Natural England rather than the RSPB added Ring-necked Parakeet to the General Licence. As the species is a fairly recent colonist and only as the result of introduction by man, it is still and will continue to be assessed as to it's potential to threaten native hole nesting species such as Great Spotted Woodpecker as it's population increases. It's a little like the Grey Squirrel debate, many people are happy to see Squirrels regardless of colour but we also have a responsibility to protect the native Red. I see no confusion as Greys (and Parakeets) are abundant in their natural homes.

Hear hear! Fancy standing at the next election? The best article I've read on anything in a long time.