Driving to see my parents this afternoon, I stopped to let these two run across the lane in front of me. They never noticed the car - just carried on with their squabble until the winner sent his rival packing. 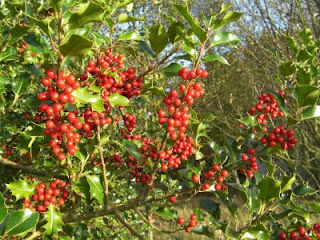 Walking round the place later, I was amazed by the number of berries on the holly trees. Some say it's a sign that a harsh winter is coming. Personally I think it's probably more to do with the summer we've had than the winter we're going to have. 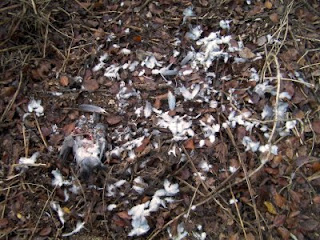 Here's something else I noticed - several pigeon kills, probably by a sparrowhawk. This was the only one where the carcass remained, but I expect foxes etc took away the others. I do hope someone has explained the terms of the general licence to that sparrowhawk, and it's being careful only to kill pigeons that are damaging crops!
Posted by James Marchington at 21:53