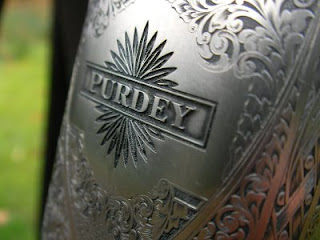 I spent this morning at the West London Shooting School, trying out the new Purdey Sporter over-and-under - the result of 5 years development by Purdey in conjunction with the Italian firm Perugini & Visini of Brescia. 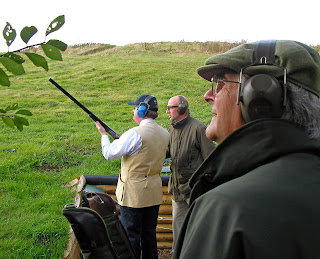 Richard Purdey watches the gun being put through its paces at the grouse stand
And how did it shoot? In a word, amazing! A year or so ago I shot a plain black-actioned prototype, which was a lovely gun to shoot. Some 84 separate refinements later and Purdey have breathed magic into the Sporter. Richard Purdey described it as 'flattering' to shoot, and it certainly flattered my shooting. 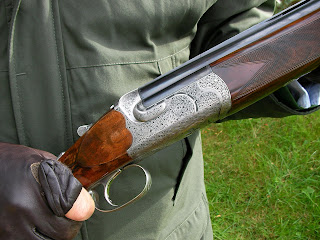 It feels natural and lively in the hands, and performed as well on fast, close partridge targets as it did on driven pheasant clays off the WLSS high tower. We finished up with one of WLSS's famous flushes, and that's where the Sporter really came into its own. Although I normally shoot a side-by-side, I quickly forgot about the gun and was able to concentrate on the targets, which is how it should be. 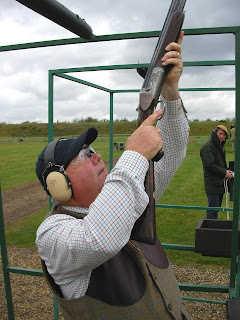 Stephen Murray, who has been in charge of developing
the Sporter from the beginning, tackles the flush
The Purdey Sporter really is a lovely gun. It's a true Purdey, despite the amount of CNC machining that goes into it, and the association with P&V. If anyone tells you it's a badge engineering job, a Perazzi with a Purdey label, then they're talking rubbish. This feels and shoots like no other over-and-under I've ever used. Every detail has been picked over and refined by Purdey's gunsmiths, who put hours of hand labour into every gun - the machining simply speeds up the early stages in the building of the gun. 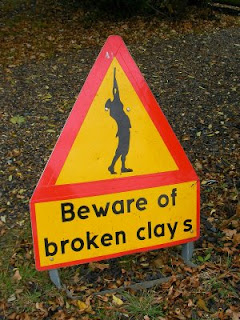 Not a sign you see every day
The Purdey Sporter is currently available in 12-bore only, with 30in or 28in barrels and Teague chokes. It has a round bar trigger plate action, with removable trigger mechanism. Weight is around 7 3/4 lbs. And it costs a cool £28,750. Credit crunch or not, you'll have to be quick to snap one up in Purdey's South Audley Street shop, otherwise there's a 6 month waiting list. A 20-bore is on the way, and should be available mid-2009.
At that price I won't be getting one anytime soon, more's the pity - but it was a real privilege to have the chance to shoot this fabulous gun.
FOOTNOTE: Normally after firing 100+ shells, I would expect to have a bit of bruising on my shoulder. With the Purdey, no noticeable mark at all. That must say something about the gun, either the stock shape or the recoil or both. Thinking back, it was very comfortable to shoot but, like so much about this gun, the difference is as much about what you don't notice as what you do.
Posted by James Marchington at 15:48

CNC machining compared to "older gentlemen with files"? Sort of like Rodin doing "The Thinker"- he removed what didn't need to be there and created--? Ditto gunmaking, does it really matter how the initial metal was removed to create the finished part(s)? The final fit and finish must needs be done by hand, the initial steps- "makers' choice perhaps?"