Where are the next generation? 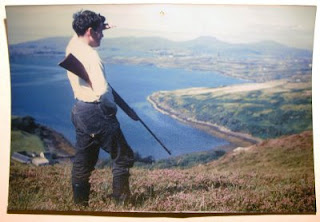 A very young James Marchington out with his .22 BSA Meteor
I'm often surprised by the sheer enthusiasm of the magazine's readers. We run a competition for ferret food, or a pin badge, or a gun, or whatever - and the response is overwhelming.
But here's a thing. If we offer a real opportunity for youngsters, like the chance to go on a course or a shoot, the silence is deafening. And it's not just us. I know of more than one scheme that offered kids the chance to go on a shoot, which has flopped through lack of interest. Why?
My knee-jerk reaction is to start moaning about 'youngsters these days...'. Too much time in front of the TV, playing computer games, etc. 'When I were a lad, I'd have jumped at the chance...'
But would I? If I'm honest, I don't think I would. It wasn't lack of interest. I spent most of my childhood crawling through the bushes, setting increasingly sophisticated traps and snares for any unfortunate bird or animal that happened along. Once I was old enough to have my own air rifle, my parents hardly saw me from one end of the holidays to the other. You couldn't want a more dedicated 'young shot', the future of shooting - that mythical creature that we all feel we should be encouraging.
If someone had tried to drag me along to a 'young shots day' I'd have run a mile. Partly out of embarrassment, partly because of an anti-establishment streak, and partly because I just didn't want to be part of that sort of shooting. That was old man's shooting, with all its pomp and ceremony and dress code and unwritten rules. You might as well have asked me to play a round with the old f*rts at the local golf club. Not likely!
So where am I going with all this? Well, firstly, I think we could do a better job of encouraging young people into shooting, if we start by remembering what it was like to be 11 or 12, or even 15 or 16. Most kids that age don't want to ape 50-somethings. But many of them do have a hunting instinct bursting to get out, which can be encouraged and nurtured in the right way.
And second, there's the uplifting thought that just because we can't see the shooters of the future doesn't mean they aren't there. I have a feeling they're on their hands and knees in a gorse bush, setting rabbit snares!
What's your view? Please email me, or leave a comment by clicking on the 'COMMENTS' link below. All ages welcome, but I'd specially like to hear from under-18s.
Posted by James Marchington at 20:11

Same subject, but some different thoughts on it can be found from Matt Mullenix over at Stephen Bodio's Querencia, here:
http://stephenbodio.blogspot.com/2008/10/sake-of-children-part-deux.html