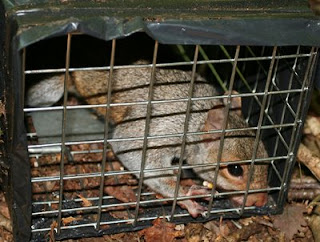 You've got to admire the deviousness of the RSPCA's press office. Their latest bit of spin on grey squirrels manages to create so much smoke that the average newspaper journo will be totally bewildered, and come away with the idea that trapping squirrels is virtually illegal.

The RSPCA is warning that people who trap and cause unnecessary suffering to squirrels could face prosecution. RSPCA inspectors have recently been coming across a number of allotment owners in North London who have been trapping grey squirrels and then drowning them. It may, under certain circumstances, be an offence if unnecessary suffering is caused to captured animals, even if the animal is regarded by some as a nuisance.

According to this report, however, what's going on in N London is that allotment holders have been talking about drowning squirrels. Simply talking about doing things to squirrels is not yet illegal.

For the record, trapping and killing grey squirrels is totally legal and positively encouraged by government and conservation bodies. They are regarded as an invasive alien species that poses a serious threat to biodiversity, including our endangered native red squirrels, as well as causing huge damage to farming and forestry. More details in a previous post.
Live-catch traps are a good way to control them, and have the advantage that you can be totally selective - if the trap catches a non-target species, you can simply open the door and let it go.
Faced with a live grey squirrel in a cage trap, you would actually be breaking the law if you let it go (odd, but the RSPCA forgot to mention that). But drowning is not the way to deal with it. That would be cruel (which is the whole point of the RSPCA release). Best method is to shoot it through the bars with an air pistol. If that's unavailable, next best method is to place a strong plastic sack over the entrance and open the door, allowing the squirrel to bolt into the sack. Mind you don't leave even a tiny gap that it can slip through - or it will! You can now roll up the sack behind the squirrel, double check which end is which, and dispatch the squirrel with a smart whack on the head, through the sack, with a stout stick. Here's the official DEFRA view that this method is 'humane'.
The RSPCA would do better to provide allotment owners with this good, practical advice, rather than pushing out vague and misleading threats. They could also put out some helpful recipes so all that meat doesn't go to waste. But I'm not holding my breath.
Posted by James Marchington at 23:06

No surprise that the RSPCA is once again blurring the lines between what is legal and ilegal to push their own agenda of save the little fluffy animals at the expense of native species, they can't seem to see the bigger picture.