Do we really want more rules?

Deer stalking must be one of the most regulated activities in Britain (and the way things are going here, that's saying something). By the time you actually get to pull the trigger on a live deer, your pockets are stuffed with Firearms Certificate, DSC this and DSC that, probably a Trained Hunter Certificate or two, written authority from the landowner, blah, blah, blah.

You'd think stalkers would kick against all this. Most folks I know are heartily sick of all the nannying rules and regulations that are heaped on us by Brussels, with the encouragement and connivance of our own government who jump on any chance to keep us under tighter surveillance and control. (Even the sheep are going to get ID tags).

But stalkers aren't like that, at least as a body (what is the proper term for a group of stalkers - a mist perhaps?). They seem to lap up all the regulations – and now the British Deer Society is demanding more!

The BDS has issued a press release demanding that killing deer with shotguns must be outlawed. Their argument seems to focus on "suspicions of the re-emergence of the practice of driving deer, particularly Muntjac, to a line of waiting guns." And yet they go on to state that this practice is already illegal.

I spoke to the BDS's David Kenyon, who put out the press release, to clarify their argument. He will shortly be publishing new research which, he says, shows that even using legal (AAA in England) shot, you can't be sure of a clean kill on deer at any range with a shotgun. (I remain to be convinced on that one – there has to be a range at which the deer is guaranteed to be 100% dead, it's just a question of how far that is).

And he believes that the way farming has changed in recent years, farmers don't drive round with shotguns any more so there's no need for the 'farmers exemption' which allows them to kill deer with a shotgun to prevent crop damage.

All worthy-sounding stuff, but I'm not convinced that the answer is a knee-jerk demand for "more regulation." Look where that's got us in the past.

If some people are organising illegal muntjac drives, the existing law is adequate to stop them. To me, this smacks of a solution looking for a problem. I guess it would be too cynical to suggest that it's a case of the stalking establishment looking to tighten its stranglehold on deer management in the UK.

In Britain generally and the countryside in particular, we are gradually being strangled with red tape. We need more rules like a hole in the head. It's time for zero tolerance on new legislation.

How about this for an idea: before any new law is passed, two old ones have to be repealed! 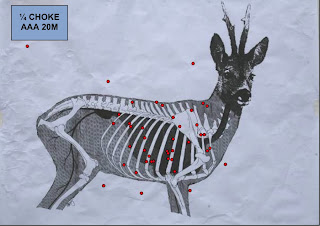 One of the images from the BDS report - this one shows AAA, 1/4 choke at 20m
UPDATE 27/10: The BDS "report" is now available on the organisation's website in pdf form here ». At first glance it appears thorough - but it isn't. The shortest range tested is 20m (in my view the maximum range at which anyone should set out to shoot a deer with buckshot). And they haven't even considered solid slugs (the only sensible load for deer at the ranges they're testing). This is the sort of report that might result from a brief that specified: "write me a report that discredits shotguns for shooting deer." It tells us what we already knew - don't shoot deer with shotguns at longer ranges, or you won't kill them cleanly. (Oh, and don't use shot that's too small, which would be illegal anyway).
Posted by James Marchington at 13:36

Speaking as a complete ignoramous I'm a little puzzled by this one.

Lots of American states have shot gun only seasons for deer.

France has a long traditon of driven hunting, as i understamd do other countrys.

One fat slug fired from a shot gun would seem to carry a similar amount of energy to a rifle bullet up to point blank, but where as the rifle round then carries on for a considerable distance, the slug rapidly loses its velocity and falls.

Based on my limited understanding i would have thought the shot gun would have made a safer option.

It's a complicated one. BDS is not a shooting organisation, it's an animal welfare charity, in the same way that the RSPCA is. So although they're broadly pro-stalking, you'd expect them to play the welfare card.

One (cynical old) stalker commented to me, "stalking in the uk is run by a clique of ex-officer types, for no-one's benefit but their own".

It's true enough that the organisations have done very nicely thank-you out of the creeping regulation of deerstalking - multiply the cost of a DSC1 course by the number of stalkers in the uk, and it comes to a significant amount of money.

As for the ballistics, a slug will do the job just fine if you put it in the right place; that's harder with a shotgun, and harder still if the deer is moving.

Large shot will also kill a deer cleanly at 10yds, even 15yds; again it has to hit the right spot but it can be done.

Like any gun/ammo/quarry combo, you need to know the limitations (and your own) and stay in the comfort zone, to ensure safe shooting and clean kills.

Of course large shot, slugs or rifles can be dangerous if used carelessly, but it's true that a shotgun projectile (shot or slug) will fall to earth a lot sooner than a rifle bullet.

Personally I don't think that safety or the welfare of deer would benefit one iota by banning the use of shotguns. Anyone using them irresponsibly isn't bothered about the law anyway.

The move might benefit the welfare of deer organisations, but I wouldn't dream of suggesting that was the motivation behind it!

So the British Deer Society is yet again pronouncing on banning types of guns and methods of shooting that it does not approve of in the lawful killing of deer. Its basis for this is a very limited series of trials that appear flawed and prejudiced against the firearm and ammunition subjected to that test. And that are anyway so incomplete as to omit entirely one major type of ammunition specifically allowed by the Deer Acts. Hardly the basis to support any reasoned claim.

Let us look at the facts of the Deer Acts. The legal use of shot guns to kill deer is highly restricted. To a mandated calibre of shot gun - 12 bore - with a minimum size of shot and specified type of projectile - AAA or SSG or Slug - by a restricted class of persons in a legally defined limited circumstance. That is the law. To use anything else not listed or in any remit outside of those noted is unlawful.

None of the BDS pattern tests with lettered shot loadings were conducted at ranges of less than twenty metres. Indeed the upper parameter of the test was fifty metres. A range at which most sensible subscribers to Sporting Shooter would not believe it common sense to use any standard 12 bore gun at any quarry furred or feathered let alone any cloven game.

So what was the point? To already prove what most of us already know that at fifty metres a normal 12 bore gun is "out of range" because it is "out of pattern"? Why no tests at fifteen metres instead? The distance a roe deer might perhaps be commonly encountered at if cornered in enclosed land?

It is noted that in fact at twenty metres the use of AAA in a properly choked gun seems more than adequate to achieve a kill on the targets. At less than twenty metres a distance that BDS chose not to test it at that lethality could only have been greater.

The use of Special SG, 10% larger in size and 25% less number in the cartridge (eleven count as against fifteen count) than the Deer Acts' SSG, should be enough to render any further judgement reached in the efficiency of SSG as invalid. Who would decide to conduct pattern and lethality tests of No6 shot on high pheasants, substitute on the day No 4 shot, because No 6 weren't available, and expect there to be any coequal result ?

And nowhere at all are tests carried out on Slug. Nowhere. Not a mention or even a test of the German Brenneke, or Italian Solengo, or French Sauvestre or American Foster or the modern "Sabot Slug"! Yet the BDS concludes, "The results obtained from compiling this report indicates that the use of shot guns on deer cannot be guaranteed to produce humane kills under most circumstances".

A flawed finding for these reasons. Only one sort of the types of the projectiles allowed - that of AAA and SSG - tested and 50% of that trial arguably flawed as a different, larger size with less pellet count was used. And with no testing at all at ranges of less than twenty metres. And slug? Not even considered, tested, or trialled!

Our continental cousins who daily in season use large lettered shot and slug successfully within the choking and distance limitations of their shot guns to take cleanly one hundred kilo wild boar might think us mad! Or maybe our roe and muntjac are armour plated!

Enforce the law as it stands and educate the use of the gun and ammunition within its capabilities. That is all that is required. It used to say as much, "Hints for a Clean Kill". on the back of the old Game Licence! Not more legislation. Or is there a hidden agenda?

I say nothing of all the other nonsense about "moving quarry". For surely a shot gun is compared with a rifle more not less efficient at shooting a moving target?

"In their response to letters criticising their position on shot guns to cull deer the British Deer Society have again seemingly omitted or evaded mention of the use of slug ammunition. Why? Is it because they don't know about modern shot gun slug ammunition or that they didn't have it to test?

Have BDS considered that? Not everybody lives in Hampshire. For some people their "local" gun shop is then two hours journey by car or even ferry added on top of the s5 cost of delivery to that gun shop!

Why should a smallholder be forced to this? He or she can hold lettered shot under a normal s2 Shot Gun Certificate and can apply for a cheaper "Co-Terminous" s1 Firearm Certificate to allow possession and use of s1 slug? No need to buy a rifle that will seldom be used. And as a matter of law their shot gun, regardless of whether shot or slug is used, remains as s2 and on the holder's Shot Gun Certificate.

Until the above matters are addressed the response by the BDS like its "tests" remains inadequate."