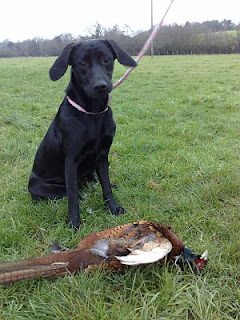 We took Bracken, the 15 month old lab, to her first proper driven pheasant shoot today - and she behaved impeccably! She sat patiently but attentively at the peg (on her rather girly pink and white rope lead) and didn't pull or whine.
When we got the chance, we sent her for her first pheasant retrieve - this nice cock, which fell in plain view an easy distance away. And she went straight out and brought it back!
OK it wasn't the most demanding task, but that wasn't the point. We wanted her first introduction to driven game to be a calm and positive affair. There will be plenty of time for more adventurous work later.
As it happens, this was also my first pheasant this season too. I know readers like to think I'm constantly swanning around getting shooting invitations left right and centre. The truth is, it doesn't happen like that, and I rarely have the time to spare anyway. Still, it was great to get out and enjoy a modest driven day, courtesy of my mum who gave up her gun for the day. Thanks mum!
For the record, the total bag was 56 pheasants, a pigeon and a rabbit, between 8 guns. I shot just over my share, at 8 pheasants and the pigeon. The weather was dull and chilly, while the company was quite the opposite. It's a small, friendly shoot near Horsham in Sussex - just the sort of shoot I like best.
Posted by James Marchington at 11:20