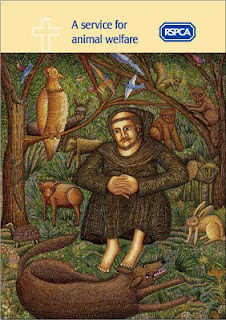 As someone who only visits church for weddings and funerals, I'm probably not qualified to comment - but I sense something cynical in the RSPCA's attempts to invent a new Christian festival, Animal Welfare Sunday. They've even written their own service for the occasion, which comes with this ludicrous cover from the school of Disney-meets-medieval-hunting-art.

During the service, the congregation are supposed to chant stuff like: "Let us marvel at the little creatures who are innocent in God's sight... the world of foxes playing around their dens..." For some reason, they omit to mention that said foxes are playing with the bones of the ickle cweatures that they ripped the heads off earlier.

Here's one Bible passage that doesn't make an appearance in the RSPCA's service; there are plenty more in similar vein:

"Every moving thing that lives shall be meat for you; even as the green herb have I given you all things" ( Genesis 9:3)

Posted by James Marchington at 10:08