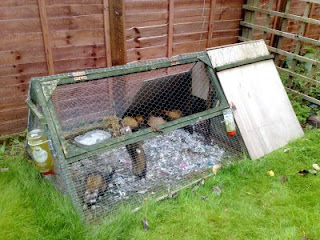 Are all ferrets stupid, or is it just mine?! They seem to enjoy chewing slugs - and not surprisingly get a load of sticky slime all round their mouths, then mope around looking miserable and trying to wipe it off.

Last weekend I spent some time ferret-proofing the area around their hutch. The problem was that I'd open the hutch in the morning to feed them, and they'd all pile out and run around the place. Trying to keep an eye on all 5 ferrets was impossible. Before long, one or two of them would have found their way under the fence. I'd round up the others, then spend 15 mins or more standing on a box trying to coax the wanderer(s) back from the neighbours' garden (they're not exactly ferret fans) - which then meant I was late setting off for work, got stuck in traffic, became even more late, etc.

So I decided to block up the exits. It took a while, screwing up bits of chicken wire and ramming them into the holes with a fencepost. And tacking more wire to the trellis fence. And blocking the hole under the garden shed. But it worked. Apart from the hole I missed - back to the drawing board, but that one's filled too now.

They still run about when I open the hutch in the morning, but now they can't get far, so it's easy enough to round them up and put them back in the hutch after I've filled the food bowl.

Anyway, during all of this faffing about, I noticed that the ferrets pounced on any slugs they found, and started chewing them - even though they don't seem to like the inevitable consequences. Are they too silly to work out it's a bad idea, or are slugs just irresistible to ferrets?
Posted by James Marchington at 08:46

can your ferrets come to my garden? I have lots of slugs! y young springer eats them, but they've given him lungworm....
vicky p