RSPB may be getting the message

Oh good grief! Another moron has shot a red kite, this time in Co Down, Northern Ireland. Story from The Independent here...

How stupid would you have to be? "Duh, there's one of them kites... er... I know, I'll shoot it." How would that ever seem like a good idea?

It's all very well saying that shooters should stick together. But just because I'm a shooter, it doesn't mean I agree with everything that every shooter does. I'm a driver too - and I wouldn't want to be associated with some of the stupid things some drivers do.

There's one bright spot in this sorry saga. For once the RSPB haven't jumped up to slag off shooters and keepers. Their press release scores a mere 4 out of 5 on the mawkishness scale, and there's absolutely no hint that shooting interests were involved.

Dr Mark Avery is quoted as saying "these birds should be a treasured addition to our countryside and not a target for illegal shooting." And that's it. No digs about local game shoots, no suggestion that keepers are persecuting anything. Now that's progress. 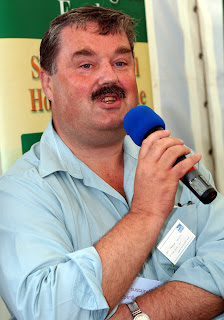 Dr Mark Avery of the RSPB,
pictured at a CLA Game Fair

Well that didn't last long did it? Here's Avery taking another swipe at shooters over harrier numbers, making it very clear that he believes shooters are the one and only factor limiting the uncontrolled spread of harriers throughout the UK:

"The RSPB has challenged upland landowners to help increase hen harrier numbers to 40 breeding pairs by 2010, with half of those on grouse moors. This year’s results show much remains to be done to achieve even this modest target. Dr Avery said: 'We want to work with shooting interests to increase hen harrier numbers but moorland owners and managers have to stop pretending illegal killing isn’t happening so we can all work together to stop it."

Posted by James Marchington at 09:01