"There are a number of absurd theories on hanging game and my favourite is the suggestion that you hang game by the feet over a silver tray. When the process of hanging (i.e. rotting) has gone far enough, the leg bones separate from the meat and the carcass falls on the silver tray. The noise alerts the butler who sends the under footman to pluck and draw the bird immediately, as it is then perfect."

Some years ago I worked on a different type of magazine that, among other things, advised soldiers how they might survive if they ever found themselves behind enemy lines armed only with a pocket knife and a couple of gold sovereigns. As you do.

"You can do many things on top of a barbecue, it just happens that cooking meat well isn't one of them."

We ran a wonderfully eccentric cookery series by the wonderfully eccentric Simon Mulholland - among his many achievements he lists cooking peacocks for a gathering of Hells Angels, inventing an exciting horsedrawn vehicle, the Saddlechariot (pictured below), and singlehandedly falling out with the entire British horse establishment (those last two are related, and connected with his almost pathological urge to clash head on with any establishment he comes into contact with). Britain used to follow people like Simon into battle; now we treat them like a toxic spill to be contained and rendered harmless by the authorities. 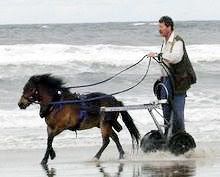 His views on cooking are unusual to say the least - hilariously un-PC reading and an antidote to the self-obsessed fussy foodies who rule nowadays. The series rambles off on various side-tracks, but includes a large section on meat and game.

"Grown women swoon when I tell them I can cook soufflés. This of course demonstrates what a pretentious load of garbage most cooking is."

I thought that the pieces had been lost for ever - but it turns out Simon had kept them, and has now posted them on his blog.

Posted by James Marchington at 12:22