England's Abbey Burton and Anita North have won silver in the women's trap pairs at the Commonwealth Games in Delhi; they were two points behind the Australian pair, and one ahead of the Canadians.

Full marks to the Daily Mail for reporting their success, and resisting any temptation to take a snide dig at shooting - except they illustrated the piece on their website with a photo of a .22LR target rifle, captioned "Happiness is a warm gun"! Someone in their picture department needs to brush up on their shooting knowledge. (They updated the page later with a photo of the winning trapshooters) 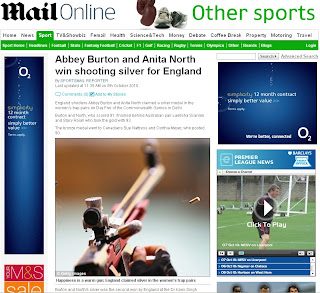 Do you think the TV coverage of shooting at the Commonwealth Games has been rubbish? If so, you're not alone - and Nicky from Oxford Gun has set up a Facebook group called Fair coverage for Clay Shooting on TV to campaign for an improvement. She wants shooters to follow her lead and email the BBC and ITV to demand proper coverage for shooting. "Quite frankly I don't care that swimmers have got diarrhoea issues," she writes. "You may have issues with Clay Shooting as a sport but there are thousands of people out there who would like to know their progress."