The tale of a Tudor ratter 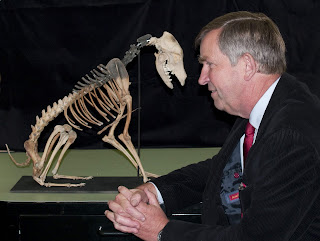 Here's a lovely dog story from Crufts. On display at the show was the skeleton of a mongrel. Nicknamed Hatch, she lived on Henry VIII's ship the Mary Rose and perished when the ship sank in 1545 - trapped inside the carpenter's cabin. Historians believe she would have been the ship's official form of pest control - cats were regarded as bad luck on board - and was the only female crew member.

John Lippiett, Chief Executive of the Mary Rose Trust, adds: “Expert analysis of Hatch’s bones suggests that she spent most of her short life within the close confines of the ship. It is likely that the longest walks she took were along the quayside at Portsmouth, her home town."

The trust hopes to build a new museum where Hatch's skeleton will be displayed alongside some of the other 19,000 treasures from the Mary Rose - many of which have never been seen by the public due to lack of space.