The RSPCA is a political animal 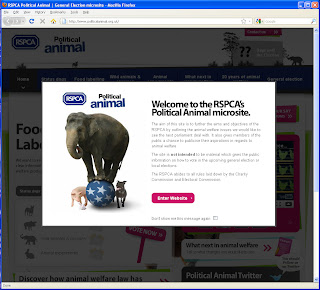 Charities aren't allowed to tell you which way to vote. The rules say they can't campaign on behalf of one political party or another.

When the RSPCA launches a website called 'Political Animal', and feels the need to put up a splash screen stressing they're not telling you how to vote, they clearly feel they're sailing close to the wind.
Posted by James Marchington at 09:19

The "Political Animal" site is a clever vote-winner for the Labour Party. Many (ZA)NU-Labour MPs have taken the RSPCA/LACS shilling, perhaps noone more clearly that Angela Smith MP, Minister for Charities, Gordon Brown's former PPS and former Press Officer for the League Against Cruel Sports. Check out what the RSPCA said about her appointment. Apparently she's "done a lot for them behind the scenes".

The RSPCA is very clearly saying dont vote Conservative with this site, the Conservative Party may repeal the hunting ban,the RSPCA should be reported to the charities commission, they shouldnt be meddling in politics at all.

Dear anonymous posters - of which I am one. Please show me the part of the site where the RSPCA says 'Vote Conservative'. For the life of me, I fail to see it.