Looking forward to the CLA Game Fair at Ragley Hall 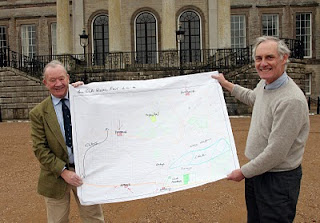 Vincent Hedley-Lewis, chairman of the Game Fair management committee,
and David Hough, CLA Game Fair director, with an early version of the
site plan for this year's CLA Game Fair, in front of Ragley Hall
Today I visited Ragley Hall, near Alcester in Warwickshire, for a sneak preview of the site for this year's CLA Game Fair, on 23-25 July.
It's a stunning location, with good road links via the M5, M42 and M40 - and also a wonderful showpiece estate with a great tradition of country sports. The shooting on the estate is let to a syndicate who shoot around 30 days a year. There are roe and fallow on the estate, with around 150 head of deer taken each year. And there's coarse fishing, taken by local fishing clubs, on the lake, river and reservoirs. The lake, which will form the centrepiece of this year's fair, is said to contain carp up to 15lb, and some eels of up to 9 or 10lb. And yes, they do have a problem with cormorants!

My attempt at a stitched-together panorama, taken from the far side of the lake,
where the CLA members enclosure is planned to be
The lovely Palladian house, designed in 1680, is home to the Marquess and Marchioness of Hertford, and stands in lovely 'Capability Brown' gardens. Around the grounds you'll find the Jerwood collection of quirky sculptures, not to everyone's taste but certainly eyecatching.
Chatting to estate manager Alan Granger, I was impressed to learn that the estate has its own butchers and farm shop selling meat and game from the estate. And they are keen on encouraging young people to come and learn about the countryside and how the estate works, running study days for local schools. The estate recently installed a wood-chip boiler, and now all the heating for the house is fuelled from its own managed woodlands. Coincidentally, Alan used to run Audley End, the estate next door to Sporting Shooter's old offices near Saffron Walden. 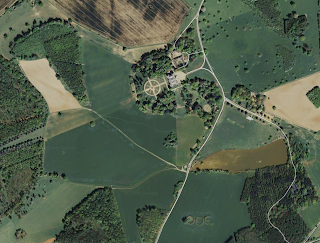 Aerial view of the site from Google Maps
Some random Game Fair facts I picked up today:
Posted by James Marchington at 18:00

CLA Gamefair is wlways a great day out (Pimms in the members enclosure!) and often very informative as well as entertaining. Hope I can make it this year.