This video is on the BBC Radio 2 website, together with a collection of photos from Chris's day shooting with George Digweed. We'll have a report in our next issue (out 3 March).


George Digweed was thrilled to take part in the Sporting Challenge segment of The Chris Evans Breakfast Show on Radio 2 this week. The feature sees Chris and his sports reporter Jonny Saunders participate in a different sporting activity each week, with an expert in the field on hand to train them up.
The pair have already taken on tennis, golf, darts and ice hockey, and for the fifth challenge George and Commonwealth gold target rifle winner Parag Patel welcomed them to the National Shooting Centre in Bisley.
George explains: "It was a dual day between clay pigeon shooting and rifle shooting. I was in charge of the clay shooting and Parag was in charge of the rifle shooting. So they turned up and we had some clay practice and then a competition, and then they shot a bit of rifle practice and then a rifle competition."
Neither Chris nor Jonny had much shooting experience before the challenge, but George says they took to the sport well, despite a difficult layout.
"The targets the National Shooting Centre put on were not really conducive to people that hadn't shot before. So on some targets they didn't shoot as well as they could have done because they hadn't really got an awareness of what they were doing, which was slightly unfortunate. But they thoroughly enjoyed it and I think they want to have another go.
"They're certainly both good enough to be able to take it further and take it on as a sport without any shadow of a doubt."
Jonny just edged the competition on this occasion, claiming the win after initially struggling to compete with an on-form Chris.
"Chris started better. He's got very good hand-eye co-ordination and knows what he's doing," says George. "But he switched off and then all of a sudden Jonny started hitting one or two and there was a bit of a problem for Chris. He hadn't done enough to be able to recover from that situation, so Jonny won."
And he was rewarded with a very special prize: one of George's World Championship medals.
"I donated one of my medals to the winner because I felt that the more they talk about the sport, the more publicity it's going to have. So I've done it for the benefit of the sport." 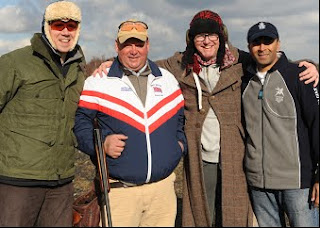 Mr Evans, over the top? Well I never.
SBW