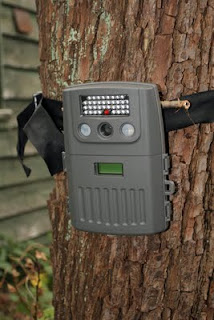 I've been waiting for an opportunity to test out the £200 Hawke Pro-Stalk camera from Deben - a nifty bit of kit that you set up strapped to a tree, then come back a day later and marvel at the high quality pictures and video it's snapped of any passing wildlife. At least, that's the theory.

Well the opportunity came along today. Long story, but when our local council issued us with slop bins for food waste, they hadn't reckoned on people like me who regularly have to dispose of the inedible bits of assorted pheasants, deer, trout and the like. The answer of course is an environmentally friendly composting scheme, otherwise known as digging a hole at the end of the garden. The foxes seem to think I'm doing this for their benefit, and do their best to dig the juiciest bits up again.

So I thought I'd set up the camera overlooking their latest hole. The instructions seem simple enough. Like any electronic gizmo, you slot in the batteries (4 D-cells), turn it on, then use the menu to set the time, date, etc. You can set up the camera using a combination of slide switches and a menu, to take photos or video, adjust the delay between pictures, and so on. 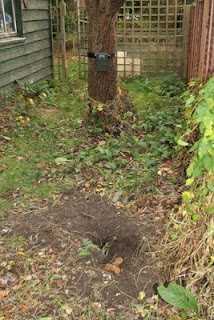 I've set it with the minimum delay of 1min between triggerings, to take a 90sec video each time it's triggered. During darkness, it should use its built-in infra-red LEDs to film in night vision. The final touch, a scoop of smelly dog food in the bottom of the hole.

Now I just leave it and wait to see what appears on the card...

UPDATE: Well I clearly got something wrong, because this morning the dogfood had gone, but the camera hadn't taken any video. Back to the instructions, which are of limited help because they were translated into English by someone who, er, doesn't exactly count English as their first language. Reading between the lines, though, I see that they're talking about an IR 'flash', rather than 'lamp', which suggests that maybe video isn't an option during darkness. Which could explain why Mr Fox was able to sneak in and eat his meal unrecorded. So tonight I'm setting it to take photos rather than video. And putting another dollop of dogfood down the hole. At this rate I'll be getting an award from the RSPCA for services to foxes!
Posted by James Marchington at 15:37

Hi James
You never followed this one up. Did you get any pictures in the end?
I've just bought one, gone through the set up(though it's not quite in the same order as the manual), tied it to ba post by the chicken house, tested the PIR range (didn't seem very conclusive) and hopefully switched it on (this may seem simple to a layman but seems a bit complex when you read the manual!!). Now I'll wait till morning.............
Meanwhile, do you think I'll get any pictures???

So the following morning............
several pictures of my wife putting the chicken to bed last night..............and several more of her letting them back out this morning. Nothing during the night.
No foxes. No rats. Nothing.
So maybe the 15m PIR works better at 10m. I'm trying again tonight.

Hi Roger,
Yes, I got a few photos like that! The PIR sensitivity isn't a precise thing, I found - it depends on the size of the animal, the temperature of the surroundings, the speed of the animal's movement, and its angle to the camera. In practice, the closer the animal is to the camera, the better - except that too close and the IR lamp is too bright and the image is washed out.
Good luck!
James

The possible problem is that the Prostalk isn't a very good camera, bad PIR and trigger speed. There are better cameras on the market at the same sort of price.