I'm hearing rumours of an imminent threat to the use of lead shot and bullets in Britain. My sources suggest there may be moves to set this one rolling in parliament sooner rather than later.

Perhaps it's coincidence that I've recently had a press release from CIC, the International Council for Game and Wildlife Conservation, announcing that the council has adopted a recommendation to phase out the use of lead shot. This is a strongly pro-hunting organisation, and they're waving a white flag over our use of lead for shooting. 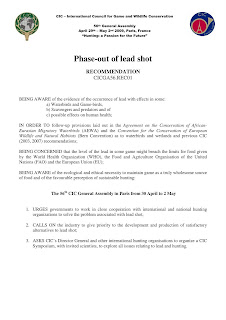 There's no doubt that an attempt to ban lead is coming, as I've mentioned before here and here. One Deborah Pain (insert wry comment here), of the Wildfowl & Wetlands Trust at Slimbridge, presented a paper at the recent Peregrine Fund conference in the USA on the 'Ingestion of Spent Lead Ammunition: Implications for Wildlife & Humans'. This is a well-funded gravy-train for hundreds of scientists and delegates to whip up a scare about lead residues in shot game, then put themselves forward as the solution. For some of them, it will see them comfortably into retirement and beyond, all the while patting themselves on the back for being the next Erin Brockovich. Their campaigning has already led to an all-out ban on lead ammunition across the range of the Condor in California and adjacent states. Yank hunters are finding the copper-based alternatives less than satisfactory. Actual benefits to wildlife, humans and the environment are hard to spot.

It's not hard to spot where Ms Pain is coming from: "birds eat lead from ammunition or ammunition fragments, suffer sub-lethal effects and mortality from lead poisoning - in their millions," states her commentary [pdf here] from the conference proceedings. She continues: "To guarantee a significant reduction in the risk to birds a phase out of the use of lead with the goal of complete elimination is needed."

And did she come home to Slimbridge and promptly forget all about it? I somehow doubt it. Trust me, this one is coming to bite us sooner or later. Are our shooting organisations ready? I hope so.
Posted by James Marchington at 21:46

Without wishing you divulge your source specifically, James, how 'imminent' is 'imminent'? I've always felt this has been on the horizon, but always a distant horizon - even after the world lead symposium indicated the severity of lead pollution from guns as recently as a couple of years ago.

I was told to watch out for the subject being raised in parliament in the next 10 days - but I'm aware that there are vested interests at work, and someone could be feeding me a line.

I hear the very same thing ! not wanting to be controversial as it is not in my nature :-) I cant see why centre fire ammo cant be made from heavy shot type metals. This type of ammo would be great and in reality not cost to much more. Even at 5 pounds a shot per beast !

Shotguns though would be affected in a big way. I wonder if the major manufacturers might be involved in this lead ban to force up cartridge prices ????

Personally, I've been using depleted uranium pellets for years now. It's the future, I tell you!