Consorting with the enemy 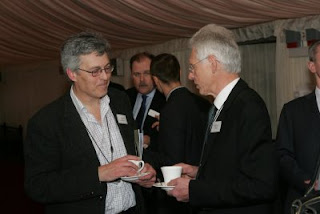 It was a surreal moment. I stood on the terrace of the House of Lords, chatting to the chief executive of the RSPB, Graham Wynne. Some of my readers will be surprised to hear that he didn't have horns and a pointy tail. In fact he seemed like a decent bloke - softly spoken, intelligent, realistic, and interested in what I had to say.

No, I didn't lay into him about magpies or demand that his organisation stop throwing brickbats at gamekeepers. It wouldn't have been productive, and anyway the occasion was all about what shooters and conservationists have in common, not our points of disagreement. This was a reception to celebrate the success of the BASC's Green Shoots programme, which is linking shooters with conservation bodies in areas from Cheshire to the Somerset Levels to Dorset. If you have anything to do with running a shoot, I'd urge you to find out more and see how you can participate in this scheme.

So what did we talk about? Well, I declared my love of walking up grouse in the Highlands, deerstalking, and wildfowling. Wynne sounded positively enthusiastic and said he could quite see the appeal. We grumbled about the way today's children don't get the chance to discover nature for themselves, getting their knees grubby in the local pond as he and I had both done. To cap it all, he said he'd quite like to eat a grey squirrel, and asked me to describe what it tastes like.

I came away musing about the huge amount of common ground between shooters and those we sometimes think of as antis, and wondering whether I was being too cynical or a trifle naïve.
Posted by James Marchington at 17:56

Mr Marchington no tie ? in such company !!!!

Seriously though talking to 'the enemy' can be very interesting and usually reveals lots of common ground; most veggies for example don't eat meat as they don't like intensive farming and factory sytle slaughter....most rough shooters hunt for the pot because they don't like intensive farming and factory style slaughter. The RSPB wants to conserve birds....shooter want to conserve birds. The RSPB has a hard job; few organisations are expected to champion both the prey and the predator when both are endangered. Yes, they need to stop blaming keepers for everything, but they aren't all bad either!