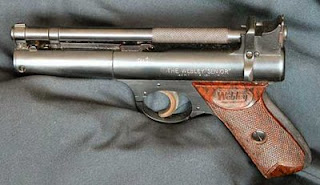 Webley Senior from auction-net.co.uk
I have a special fondness for Webley – probably due to the hours I spent plinking with a Webley Senior air pistol as a youngster. In those days it was generally thought to be a good thing for kids to play with guns, although you were discouraged from actually taking them into school.

So I was sad to hear about the troubles Webley had got into over recent months. And then, like a proper Penny Dreadful hero, with one bound Jack was free...

As a simple journo, and a country one at that, I don't understand the workings of corporate finance and company law. But Webley seem to have pulled a stunt worthy of Paul Daniels.

On 31 Dec, while most of us were either shooting or stocking up at the offie, Webley Ltd – the grand old gunmaking name with a history going back to 1790 – was declared bust and then bought by a company with a very similar name, which plans to carry on trading. Minus, so far as I can see, the debts that were causing so much trouble.

It's all explained in the letter (below) that Webley boss Mike Hurney sent out to the company's customers on 2 January.

I wonder if I could do the same thing to my overdraft?! 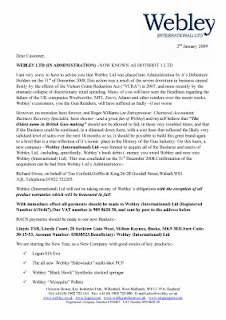 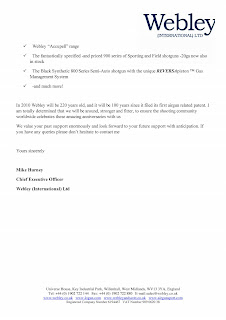 UPDATE: Apparently this wheeze is known in the trade as a "Pre-Pack Deal". It's perfectly legal, but the government is said to be cracking down on the practice which has been criticised over its lack of transparency and fairness. New, tighter rules came in on 1 January – coincidentally the day after the Webley deal, under which, for instance, the administrators must "always perform their role in the interests of the company's creditors as a whole". More here... (you may have to register to read the full article) And here. And here. The Insolvency Service has stated they will be clamping down on "any directors who misuse the administration process to disadvantage creditors or seek to gain benefit for themselves"
Posted by James Marchington at 08:52