Shooters donate to help save birds of prey 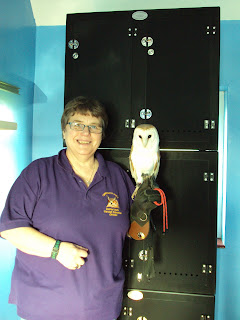 This will come as a surprise to some people - but shooters rallied when Chrissie Harper put out a plea for help for her bird of prey rescue centre in Oxfordshire. Chrissie, who runs Chrissie's Owls and Stonesfield Owl Rescue, mentioned on Facebook that she was desperate for funds to buy new hospital boxes. The boxes were needed to cope with a massive increase in the number of owls and birds of prey needing treatment and rehabilitation, due partly to recent harsh winter weather, and partly to what Chrissie calls the 'Harry Potter effect'.

Shooters among Chrissie's circle of Facebook friends took up the cause, reposting the appeal and making their own donations - raising a total of £300. The amount was matched by an animal rescue centre near to Chrissie in Oxfordshire, enabling her to buy six boxes.

Here's Chrissie's heartfelt letter of thanks to me and the other shooters involved:


Chrissie's Owls and Stonesfield Owl Rescue was set up nine years ago by myself and my husband Tom, although I have worked with owls and birds of prey for twenty years, we run it together with the help of a few dedicated volunteers who help out when they can.

We have in our care forty four owls and birds of prey at the moment, these being mainly birds we have rescued from bad homes or ones which have been bought as pets, the Harry Potter effect, and then become unwanted. Last year we also took in or collected fifty wild owls and birds of prey that needed care until they could be returned into the wild, sadly a lot of these birds were very badly injured, mainly being struck by vehicles or because of the extreme weather conditions starving to death and although we try to save everything this is impossible and also heartbreaking when we lose one.

Last year was our busiest year ever and stretched us to the limit and we struggled to find room for some of the birds that needed our help, just before Christmas I was called out six times in as many days, we never refuse to help and provide a twenty four hour rescue service, we also have the complete support of our veterinary practice which we are very grateful for.

We have always raised our own money to fund our rescue, this is achieved by going to Country Shows and other outdoor events and I also give talks all over the country to groups and organisations, we also do a lot of school visits which we feel are very important as children are the future of our wildlife.

I have been totally overwhelmed by the help and support I received from people who I had never met but were my friends on Facebook when I mentioned our predicament and desperate need of Hospital Boxes to keep the large amount of rescued birds we had in last year and struggled to find room for, the response was amazing, I am very proud and had never asked for any help before but sadly felt that if we didn't get help we would not be able to do what we love and are committed to in the proper way.

The help I have received has made me many friends, many from an unexpected quarter, the shooting fraternity, I have to be honest and say that some of these people have had a few home truths from me in the past and to get their support and learn that they to have a genuine love for the owls and birds of prey that I dedicate my life to came as a big surprise to me. I have been very biased toward hunting, and I am afraid there is not much change in that direction, and shooting but this has shown me that we should not judge everyone by the few bad apples that spoil the barrel so to speak and we must all try and work together finding a solution to the problems facing our countryside today, it is time to talk not fight.

We run our own conservation scheme, all be it a small one and donate five owl and kestrel nest boxes every year locally to try and put something back for the pleasure we receive from working with these birds and hope to continue for a few more years, especially trying to help our beloved Barn Owl and the Kestrel which are in such decline.

The support I have had has shown me that we can work together and I would like to thank each and every one of you who gave so generously from the bottom of my heart, I have learnt a lot from you all and if I can change my attitude and work with you then others should be prepared to do the same, I will never agree to everything that happens but if this helps build bridges between people who shoot responsibly and people like me who donate our lives to the things we love and believe in then I will be happy.

A cracking piece there James, lets hope this is just the start of a long overdue bridge building session!!

A good cause and a lady who has the birds interest as her only priority.

It's always good to see something being done to support such people in their bid to help wildlife.

Well done to everyone.