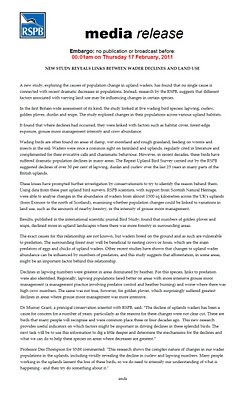 Fascinating, this latest RSPB press release (which at the time of writing hasn't made it onto their media website).

Instead of the headline-grabbing whizz-bang style which the RSPB's media department is capable of, it's almost like they're trying to bore you to sleep before you get to the nitty-gritty.

What the release actually says is that predator control works. Upland waders such as lapwing and curlew are affected by predation. And they do better on grouse moors, where predators such as crows and foxes are controlled. 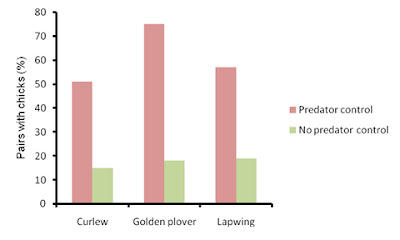 UPDATE 17 Feb: The Game & Wildlife Conservation Trust were quick to pick up on the point. They've issued the following press release:


Game scientists welcomes RSPB study showing influence of predators on wader declines.
The Game and Wildlife Conservation Trust (GWCT) welcomes the recent RSPB study which explores the causes of population change in upland waders.
Professor Nick Sotherton, director of research with the GWCT said, “We welcome this RSPB study as it reinforces the message that predator control on grouse moors benefits declining species of birds, especially where crows are removed.  It would be very sad if we lost a significant fraction of our bird life through want of necessary wildlife management. The evidence from our research is that such losses are not inevitable and the North Pennines, which is almost entirely managed for grouse shooting and hosts high concentrations of waders, stands as a testament to the difference game management can make to conservation in the uplands.
“However, contrary to the views of the RSPB study, we also found that golden plover breed best on grouse moors and that survival rates are lower away from grouse moors. Indeed our study at Otterburn found that 75% of golden plovers produced young on keepered plots compared to just 18 per cent where predators were not removed.”
This latest study adds to the weight of evidence that has already emerged from the results of the 9-year Upland Predation Research project carried  out by the Game & Wildlife Conservation Trust at Otterburn in Northumberland. The Trust’s findings, which were published in the scientific publication, The Journal of Applied Ecology identified for the first time that the control of common predators such as crows and foxes  significantly improves, by more than three times, the breeding success of curlew, lapwing and golden plover – all species of conservation concern.  Professor Sotherton said, “It is gratifying that the RSPB’s latest work confirms the Trust’s findings and further proves that securing the future of these vulnerable birds is within our grasp.”