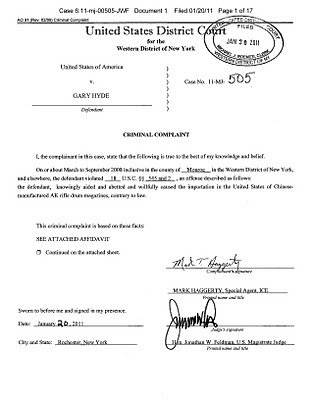 Download the full charge document here
Gary Hyde of York Guns was arrested in the US on suspicion of illegally importing thousands of Chinese manufactured AK47 parts. The story has been reported in the York Press here.

It seems that Hyde was also implicated in an alleged plot to supply 130,000 Kalashnikovs to Libya - he was named in US State Department classified memos released by WikiLeaks. More info on that one here.


We are aware that allegations have been made against Gary Hyde a director of Jago Ltd. by the United States Authorities.

Although Gary Hyde is Managing Director of York Guns Ltd, no allegations have been directed towards York Guns Ltd. and no enquiries have been made of the company by the US authorities.

The company will continue to function as normal in his absence.