Today I went over to my parents' place, to see what the trail camera had picked up over the past week. It had snapped a roe deer and a fox, but with so little activity in the entire week it was clear the fox family had moved out. 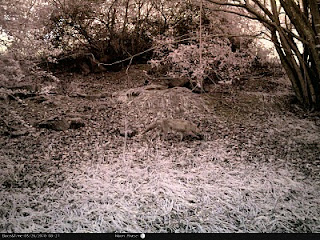 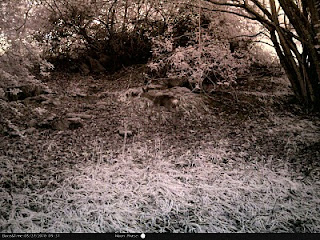 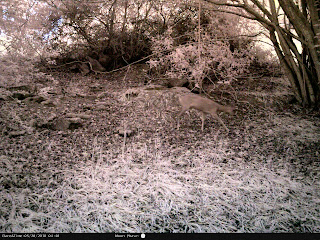 I was fairly sure I knew where to find them, so I stalked over to the far side of the wood, where I'd seen the vixen and cub a week earlier, and settled in under an overhanging bush. After an hour or so, the vixen set off out of the cover and along the hedge away from me. She was clearly hunting, and made a half-hearted lunge at a couple of rabbits grazing by the hedge - they just hopped underground out of the way, and the fox trotted on and round the corner out of my sight.

Half an hour later, I noticed the rabbits scuttle off in alarm, and switched on the camera. Sure enough, over the hill came the vixen, bringing back her catch for the cubs.

Posted by James Marchington at 21:06