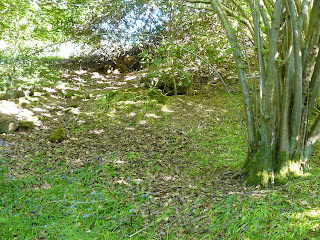 There's a fox den in the woods near my parents' house - most years it produces a litter of cubs. I'd planned to get some film of the cubs when they first started to emerge, but with one thing and another I wasn't able to get over there until this weekend. I think I may be too late!

There's a big patch of flattened bluebells in front of the den, so it looks like the youngsters have been playing there. I've spent a good few hours sitting up watching, but only once did I get a glimpse of a foxy-red blur in the half-light. 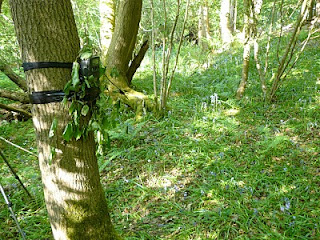 I've set up a motion sensor trail camera watching over the den. It went off around 3.45am last night, but all it caught was a moth (plus some owls hooting, and an insomniac blackbird).

Today I looked a bit further afield, and came upon these two foraging in the field on the other side of the wood:

You can't see it clearly in these clips, but I think the vixen has had some sort of accident - she is missing a lot of hair from the back half of her body, and she walks with a bit of a limp. The cub looks healthy enough, though, and there was another skulking in the brambles on the edge of the wood.

I've left the camera set up, in the hope they'll come back to the den eventually and I'll get a photo.
Posted by James Marchington at 00:13