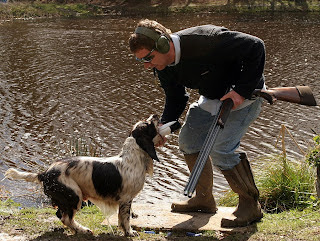 Today I paid a flying visit to Mouldsworth Shooting Club in Cheshire for the UK unveiling of the new BanGo system. It's basically like shooting clays that you then send your dog to retrieve. 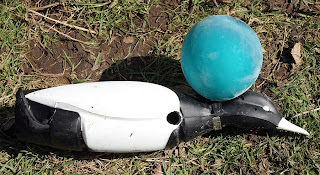 The target is a dummy duck, made of tough plastic. It's fired from a carousel type launcher, similar to an automatic clay trap, with a remote release. There's a rubber balloon clipped to the duck's neck and filled with flour, so you see a puff of white if you hit it. 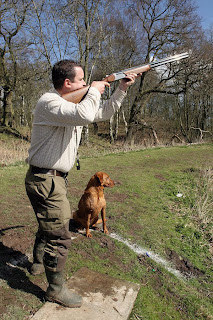 So you step up to the stand, call for the bird and shoot it just like a clay. If you hit and the balloon bursts, you score a hit (half points for a second-barrel kill). Even if you miss, of course, the birds falls to earth - or into the water if that's how the course designer has set it. 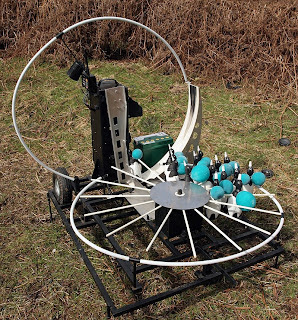 If this was clays, you'd pick up your score card and move on - but now the fun starts! You have to send your dog (which naturally has been sitting attentively by your side marking the birds!) to retrieve each bird, and the retrieves are timed and scored. 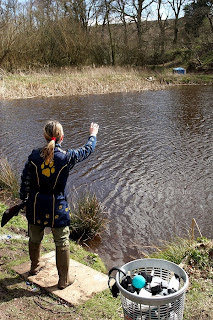 It was great watching the fun in the lovely surroundings (and beautiful weather) of Mouldsworth. Despite a certain amount of confusion, and some hiccups with the launchers, the shooters certainly enjoyed it, although not as much as the dogs! 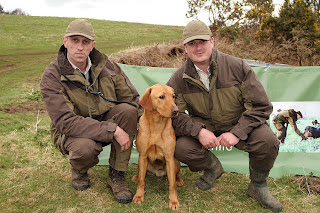 Mike and Richard (pictured) say they'll be running the event at Game Fairs throughout the summer, as well as running some corporate days etc. Check out their website www.bangomaster.co.uk for details of where and when.
Posted by James Marchington at 21:51

James, it sounds like a great sport. I followed the link but the only event listed was last week. Will you be publicising future events in Sporting Shooter?

The lads told me they would be updating the website shortly with details of their events through the summer - suggest you leave it a few days and try again. We'll be printing details in the mag when we get them too. J.

looks great please can you keep us informed James