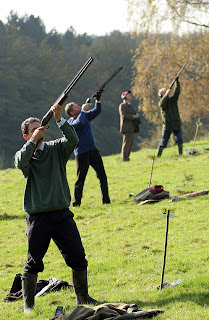 I'm just back from the annual Lords v Commons clay shoot, organised by BASC. This year it was run as a simulated game day at Squerryes Court, near Westerham in Kent.

It was a fun and interesting day, although not quite as I'd expected. Having never attended this event before, I'd imagined a bunch of MPs who'd never handled a gun, being introduced to the sport. In fact it was more like preaching to the choir - all the guns looked like they spent most of their spare time on a grouse moor or a driven pheasant peg. Still, it was a good chance to hear about the political side of our sport from the horse's mouth.

At lunch we had short presentations from Mark Elliott of NOBs, and Judith Howell, BASC's politics and policy officer. Discussions afterwards ranged from the Revenue going after beaters' "wages", to the Shoot Assurance Scheme, to whether big commercial shoots are a threat to the sport.

Plus there's a bit of concern about the trophy. Apparently it's gone missing and no-one is owning up to knowing where it is. Policians, eh - can't trust 'em!
Posted by James Marchington at 18:23