It's badger madness in the media. As the deadlines for consultations approach in England and Wales, everyone from Brian May and George Monbiot to the Badger Trust and the RSPCA is offering their opinion - and doing their best to whip up a storm of indignation at the impending 'senseless slaughter' (May) by 'bloody-minded dolts' (Monbiot).

As you try to make sense of all the hysterical outpourings, here are a few simple facts to keep in mind: 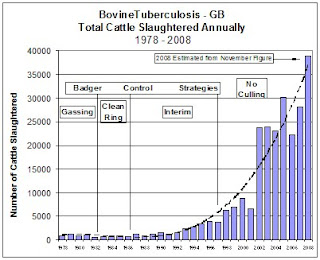 We almost beat bovine TB back in the 80s, with a robust policy of cattle testing and gassing badgers. Even the 'clean ring' policy held things in check. But as the political climate turned, badger protectionism grew - and bTB spiralled out of control.

This is not rocket science. We could wipe out bTB in a few years if government had the cojones to go back to gassing setts of infected badgers, together with a strict and effective policy of cattle testing and movement control. Sadly, thanks to the efforts of May, Monbiot, RSPCA and the rest, that will be politically impossible - we will end up with a half-arsed policy, condemning thousands of cattle, and badgers, to an unpleasant death for years to come. And they claim to be the ones who care about animal welfare!

Why do badgers inspire a passion in the general public which their friends the foxes, rats, bunnies and squirrels don't? Why are farmers, keepers and landowners allowed to manages the number of foxes and rabbits and why is everyone happy to try and exterminate all the rats that share their environment but badgers are held so special they are untouchable? Don't get me wrong, I like badgers (and foxes, rabbits and even squirrels and rats have their place) and don't want to see them wiped out but Britain needs TB under control and sadly cattle testing along with badger culling seem to be the only proven way to do this. I will happily listen to the badger protection folks if they can come up with a non-lethal way of controlling badger TB and I think vaccination of non-infected badger familes must work alongside culling. I wish Brian May would go back to playing guitar...he's good at that!

It's a sad fact when you here the word cull . People imagine you are going to go out and destroy every single one . I have to say i quite agree that badgers that have TB need to be dealt with if we don't then isnt the prblem going to get worse , and then where would we be . Yes vaccination for the badgers that don't have TB , but if we don't do something about the one's that do we will end up going round in circles . I am no expert and don't pretend to be so . But i can see we need to tackle the problem head on before it gets to the point where we can't control it , then what happens .