While I was in Skye, there was much talk among local fishermen about what might be causing the horrific injuries to seals - more than 50 have washed up with a deep spiral gash around their bodies, sometimes going from head to tail with a couple of turns around the body.

Many of the people I spoke to were deeply suspicious of experimental tidal power installations, although there were conspiracy theories about secret nuclear submarines and the like. Some newspaper stories suggested fishermen as one possibility, although none I've seen so far has blamed gamekeepers - it can only be a matter of time!

A Canadian scientist is suggesting it might be Greenland sharks, which sounds to me about as likely as sea eagles.

The Scottish Agricultural College set up a blog for discussion of possible causes. The best theory I've seen so far involves some sort of propeller like this: 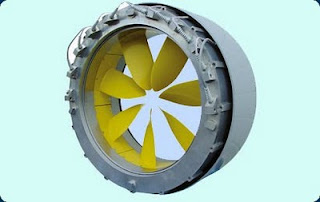 Posted by James Marchington at 18:26

We have a tidal generator http://www.seageneration.co.uk/

and seals live very close by but the blades stop if any substantial object is within 50 feet of them.