What a great Midland game fair!

I always enjoy the Midland - I think it's probably my favourite countryside event, with just the right mix of people, stands displays and events. I had a great couple of days at this weekend's show, catching up with old friends, meeting new people and catching up with all the news and gossip. 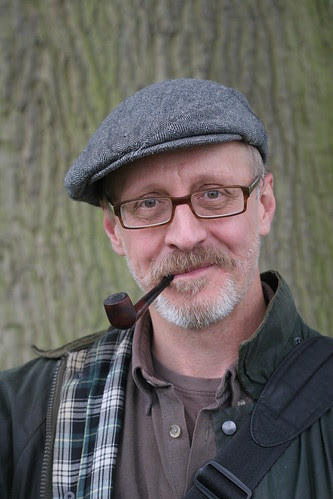 It was a treat to catch up with Hubert Hubert, writer of the Rabbit Stew blog, who told me he'd made the trip by bicycle. I was impressed with the neat patching on his Barbour jacket. Some people might say to themselves "Here's a bloke with too much time on his hands." Me, I was thinking "Here's a bloke who might be able to write some useful tips for our readers!"

He's recently being having a bit of a battle with some of the readers and moderators on the Weihrauch hunting forum - basically the purists aren't happy that he owns up on his blog to being less than 100% perfect as a hunter. I can understand the mentality that says we should portray our sport in the best possible light. But I think it's downright silly - and counter-productive - to pretend that nothing ever goes wrong.

In a similar vein, I discovered that Neil Dale of NOBS has come in for a lot of stick for openly discussing a shooting accident he had while pigeon shooting earlier this year, where a faulty gun discharged and injured his partner in the leg.

As a shooting magazine editor, I'm sometimes asked to hush up a story that someone thinks shows shooting in a less than perfect light. It's a real dilemma. The last thing I'd want to do is damage the sport of shooting. But as a journalist it goes against everything I believe in to censor a story. And I'm sure that being open and transparent is the only way we can make our sport safer and stronger. I'd be interested to hear readers' views on that one. 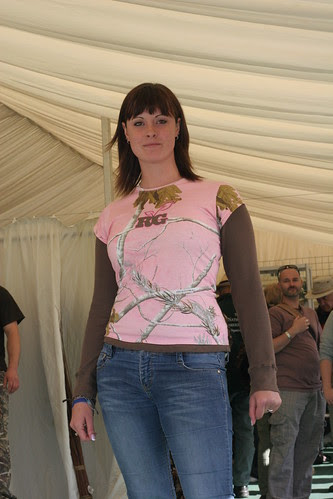 Realtree and Rivers West put on a great fashion show, unveiling some of the interesting clothes they've got coming up for next year. It seems odd to think of wearing camo to be seen rather than not be seen - but after this show I can imagine Realtree becoming something of a fashion statement.

There was an interesting discussion about this recently on the Up North Journal podcast. Mike Adams explained that he wears camo to work and around town as a kind of 'badge of honour', a way of showing his pride in being a hunter - and he says it leads to interesting meetings with other hunters while he's out and about. 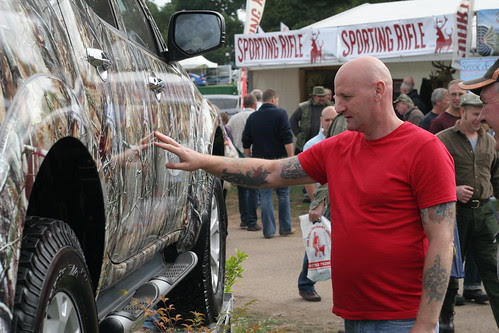 There was a lot of interest in the Realtree covered Mitsubishi L200 at the bottom of gunmakers row. It was fun to watch the way people couldn't resist touching it, to see what the finish was like. Talk about making a statement on the high street - that one would certainly turn heads! 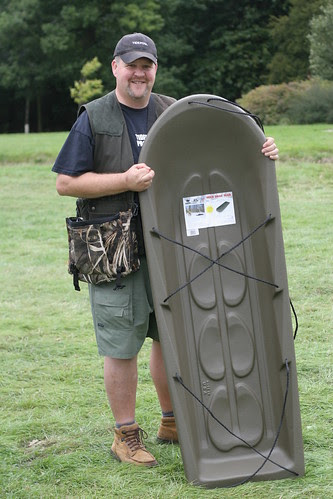 I came across very few genuinely new ideas and products at the show (no doubt I'll get my ear bent now by companies reminding me of their fabulous new kit!). One that did catch my eye was this 'deer sled' being sold by Kevin Wilcox at Tidepool wildfowling. It's used in the States by deer hunters to drag their kill back across the snow to camp - but Kevin reckons it's the ideal way to get your fowling kit out across the ooze, and back again with your bag. This size was selling for under £40, and there are other sizes on offer too. It's incredibly tough and lightweight, and if your trip on and off the marsh is suitable it could be just the job. 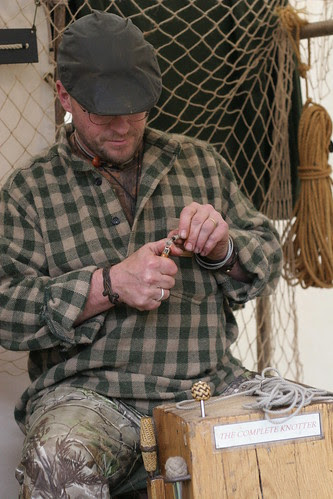 New kit is only one small part of why people go to shows like the Midland of course. I always enjoy tracking down traditional craftsmen - like this chap, John Kemp, "Woodsman, Traditional Rope Worker and Complete Knotter". I particularly enjoyed his wry dig at health and safety culture: 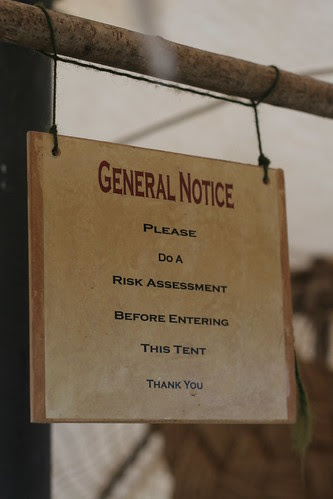 Well, there was plenty more to see and do at the Midland - we spent a long time watching the excellent competitions in the gundog ring, for instance. On a personal note, I got a brilliant Christmas present for my dad (which I'd better not mention here in case he discovers what it is), and paid a terrifying amount of money for a pair of Fjallraven trousers that I've been lusting after for a long time. Nordic Outdoors didn't have the size and colour I wanted in stock, so they took my money and promised to post them on as soon as they get back to Edinburgh. Let's hope they don't forget!
Posted by James Marchington at 12:23

Oh dear, oh dear...pink Realtree camo?! A horrible crime against fashion. Tweet and barbours however are all the rage this year with youngsters from Manchester to trendy East London...maybe you could somehow take advanatge of this bandwagon?!