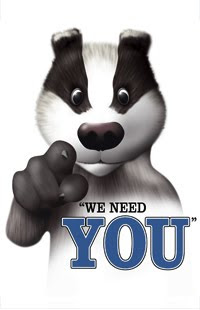 Now it appears Britain is over-run with giant rats - and it's all the EU's fault.

The bonkers Douglas Batchelor of the League Against Posh People is offering the government advice on firearms control.

In other news, spokesmen from BASC and Countryside Alliance had a friendly discussion about who is doing the best job of protecting the interests of the shooting community:

Yes, the silly season is truly upon us. So I'm off to the Isle of Skye where I will be shooting, fishing, hillwalking, sailing and generally having a good time - mostly beyond the reach of mobile phones, internet, email and all that. Updates will be few and far between.

Oh, and don't even think about robbing the house while I'm away. My daughter's rugby-playing boyfriend will rip your limbs off.
Posted by James Marchington at 09:07

Ah I know you are really going to see your favourite bird that you were trying to keep quiet about,the Sea Eagle,somewhere on Skye I think there are short boat trips where they throw fish in the sea or loch and trained the S E to give good views of it picking them up,feel sure you will enjoy the sight even if not your type of bird.Have a good time.

Ah, thank you Sooty. We get plenty of golden eagles up the glen, but only occasionally see a sea eagle - they're not daft*, and stay up at Portree where the trip boats chuck in buckets of easy food for them for no effort. I missed out going on the boat last visit, as the weather was truly awful. I hope to go this time - and maybe get close enough for some nice action photos.

*The daft ones were the numpty visitors who sat for hours in front of the nestcam monitor in the Aros centre this spring - watching last year's nest site!

Had me confused there for a minute James as we go to Aros on the Isle Of Mull which is really close to the viewing centre of Sea Eagles that come on T V wildlife programs,hope you get calm weather and get some nice pictures for us.We always find the S E easier to see than Goldies as they seem less wary and wonder if you see Hen Harriers on Skye as there seems several on Mull and what a great sight,think there would be lots of winners if any sort of solution to their problem could be found.

It's a long time since I went to Mull - lovely place, I must go back there sometime. Yes, the Aros Centre is what they call the visitor centre just outside Portree.

We usually see a couple of harriers on Skye, but I think it's crows and foxes that really hammer the grouse there - the land hasn't been keepered for a generation.

The biggest problem, on 'my' patch at least, is the sheep farmers who will cheerfully burn a whole hillside of heather to provide grazing. That on top of wanton forestry planting has destroyed huge areas of heather moorland, and I can't see it ever returning. Sad.

That giant rat story was just a spoof - read the real story at the Daily Mash: http://bit.ly/ahBZiF ;o)