Daily Mail columnist Liz Jones moved to Exmoor and has done a splendid job of making herself unpopular with locals with her special blend of condescending, mickey-taking, whining and completely failing to understand country ways.
Now someone has taken a pot shot at her letterbox (pic above)... or have they?
Multiple pellets in a pattern, so it's probably a shotgun - but it's not circular enough, not dense enough in the middle, and there are too few pellets for any normal load. Here's what a normal game load does to a steel plate: 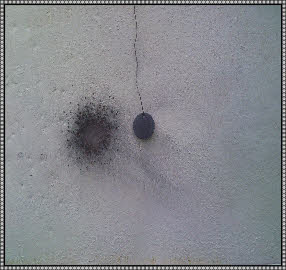 Could it be a special load? The pellet marks look quite large, perhaps BB, but again they're not spaced right. At that range (this would have to be 5 yards at most, to have such a restricted spread) you'd expect a very dense centre. You'd also expect the steel to look more evenly dished - the mailbox has a crumpled look about it, almost as if the individual strikes occurred separately.
A rifle perhaps? A centrefire or even a rimfire rifle would have put its bullets straight through that steel (as in that parking sign I photographed recently). Multiple airgun pellets? Doesn't look like it.
In fact, it looks to me a lot like someone whacked the box multiple times with something hard and pointy, to make it look like a gunshot. And I wouldn't put it past an anti to have done that to get shooting a bad name. It seems Ms Jones isn't a big fan anyway: "I don’t agree with blood sports, but I’m not alone in my views. In one village, residents are so fed up with the noise and mess from pheasant shooting they want it banned." Hmm, more whingeing incomers eh? I bet the locals love them too.
Fear not, Avon & Somerset's finest are on the case. A spokeswoman said: "We’re treating this as damage to a mailbox."
Meanwhile Ms Jones appears to have missed the point: "I don’t mind people hating me, but if they do drive me out of the area, lots of people I employ will be made redundant," she writes. "I employ a local gardener, tree surgeon, equine vet, two chiropractors, an equine podiatrist, a holistic shearer, an ecologist..."
Posted by James Marchington at 20:13

Town comes to the country.

Ms Jones obviously has a town house in London and I would say from her writings one in the US ?

So she comes rolling in to our countryside thinking all is rosy little Lambs in the spring sunshine jumping on their mums backs etc She then gets a dog that by her own admission has on at least two occasions killed a local farmers sheep !!!!!!!!!! She goes to the local shop to buy her £20.00 bottle of wine ! that must have been brought in specially for her as our local shop would have had to go to the bank manager to ask for an overdraft to buy a vintage so special ! then she complains that the locals were talking behind her back.

Next the local married farmer whom she has taken a shine to. From my experience if she was good looking the local farmer would have shagged her !! That's what farmers do ! and Gamekeepers come to think of it .

Back to the shocking shooting. No 12 gauge load would have made a pattern like that 60 or so pellets would be less than a 1oz load. Maybe we have a home loader ?

Maybe someone has taken a hammer and a round nosed punch ?

She employs all these people by herself ?? bloody hell she must have a 250K wage bill. What a load of crap to suggest she employs so many people.

Liz Jones and all you second home owning town folk who don't contribute nothing to the countryside other than ASBO,s to out Cockerels please go home !!!!

She mustn't look after her horse very well if she thinks her moving will cripple the local vets! And what of the keepers, beaters, loaders, pickers-up, game feed suppliers, game breeders, pubs serving local game etc etc etc she'll put out of work if she bans shooting?! For me only vegans can hold legitimate anti-shooting views. It's not a blood sport; it's a harvest of meat that people happen to enjoy and pay for! Rather a pheasant any day than a commercialy reared meat hen.