Whew! What a week that was. I've been rabbit stalking and lamping with Terry Le Chem... 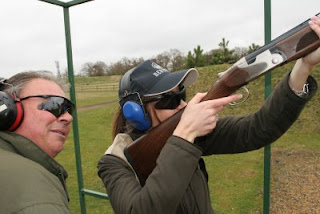 And taken Chloe Finch from the Countryside Alliance to learn rifle shooting with Ian Spicer of Red Deer Outdoors, at the British Sporting Rifle Club at Bisley...

Along the way, I came across some terrific bushcraft items by Neil Andrews (who cooks a mean venison stir-fry, and will shortly be instructing on some new bushcraft courses at Cowdray in Sussex)...

And I discovered Schultz & Larsen rifles, which I'd never encountered before, and discovered they're really rather good (here's Ian Spicer firing one)...

So to relax this weekend, I went fishing and caught my first fish of the year – two trout which are now in the fridge being turned into trout gravadlax, a cunning recipe borrowed from Mark Gilchrist (you'll find it in the June issue of Sporting Shooter)...

...just one little hiccough – today I discovered some lowlife has cloned my bank card, and is currently living it up in Canada at my expense! The bank has frozen my account, so that's put paid to his fun. It also has the unfortunate side-effect that I can't use my bank account either. Hmm.
Posted by James Marchington at 22:19

People often say 'I bet you spend all your time shooting,' and I tell them no it's all hard work and no fun - but I can't deny it, this week really was an exception! Loads of fun, and I even got a few stories for the mag.