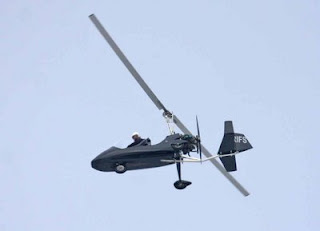 The gyrocopter, pictured on 12 Feb overflying a hunt
- pic from forum at www.hunting-directory.co.uk
A hunt supporter has been killed by a gyrocopter thought to be following hunts in the Warwickshire area. Two people have been arrested on suspicion of murder. BBC News story here »

More info here » It seems that complaints have been made recently about a gyro swooping aggressively over the Warwickshire and Heythrop hunts. "It is understood that an animal rights' group, Protect Our Wild Animals (Powa), has been monitoring the Warwickshire and the Heythrop hunts from a gyrocopter over the past three weeks."
Comment from the airfield manager suggests the aircraft was taxiing at the time it struck Trevor Morse, 48. There's obviously more to this story than meets the eye. Could Mr Morse have gone to remonstrate with the pilot?

Selection of photos of the aircraft here

Discussion on a pilots' forum here

...and on a gyro forum here

...and here's a thing - a pic of the self-same gyro, taken by a hunt supporter and posted on 12 Feb, with the comment "Has anyone come across this character at all. He was flying above us today while we were on hound exercise". EXIF data shows it was taken with a 400mm lens on a Canon 40D, so it wasn't as close as it looks, but even so...

Update: The League Against Cruel Sports has issued a statement distancing itself here »

Update 12 March: POWA have now posted a statement on their website: "The incident which took place at Long Marston on Monday 9th March was a tragedy. We send our condolences to the family of the deceased."

Bryan Griffiths, 54, has appeared in court charged with murder. Story in the Sun here. The court was told that an eyewitness filmed the incident with a video camera.


I'm told that the video is horribly clear. The aircraft set off, from a standstill, towards him, and mowed him down head-on. The aircraft passenger is a well-known animal rights activist with a long and repulsive list of convictions. The video was shot by a third anti, who was doing a ground support/handling role.

This post is clearly bothering the antis, who would rather brush the whole thing under the carpet. I've had the following 'comment' from 'Phasianus' which may or may not be is a feeble disguise for the anti-shooting extremist, woodworker and general busybody Kit Davidson of Animal Aid:


This appalling incident was an undeniable tragedy for everyone involved, most of all for the victim's family. But what has all this got to do with the editor of a shooting magazine? Why are you further reporting on an occurrence that is already well covered in the mainstream news media? Why are you doing your own little web trawl to gather and publish as much information on this non-shooting issue as you can? You must be the only editor in the Argent [sic] stable of titles who under the apparent auspices of his magazine, is working outside of his brief, following his own agenda and neatly filing his missives under 'antis' and 'foxhunting'. There is a clue there, isn't there James? But I may not be the only one to notice that despite the almost simultaneous prominent jailing of huntsman Christopher Marles, who used his mount to dangerously assault an 'anti', you have failed to report or file this criminal conviction in which the Recorder labelled Marles a "drunken lout". I don't care if you block the publication of my comment or not. Prejudice exists doesn't it James?

Cunningly poisonous stuff - in a few short sentences he has attempted to belittle my efforts, drive a wedge between different branches of fieldsports, threaten me with the disapproval of my employers, and suggest that the jailing of someone for ABH somehow has some relevance to the welfare of foxes. But then twisting the truth and peddling bigotry is his stock in trade.
Posted by James Marchington at 22:40