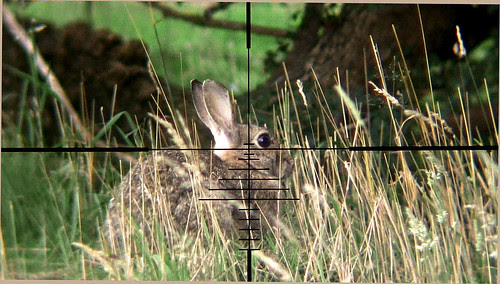 Well I finally got it finished. Since the summer, in my spare time I've been working on a video about hunting rabbits with an air rifle. When I started I knew it would be a lot of work, but I had no idea just how much!

I wanted to show how I stalk a rabbit, using natural cover and the lie of the land. Which is simple enough because you can just set up the camera and do the stalk in front of it. But I also wanted to show the quarry, right up to the moment of taking the shot. And that's not so easy!

For some of the shots, I got within range carrying both the air rifle and the camera on a tripod. Then I set up the camera zoomed in on the rabbit, and left it rolling while I set up and took the shot with the airgun - hoping that the rabbit wouldn't hop out of the frame before I fired.

For others, I wanted to show the view through the scope as I took the shot - "Guncam" style. That meant I had to rig up the camera on the gun, looking through the scope. That caused enough problems of its own, because the camera has to be fixed very firmly in position, at exactly the right distance behind the scope and in perfect alignment. And then, because there's a camera in the way, you can't look through the scope to take the shot - you have to use the little preview screen on the camera, which is not the easiest thing to aim with. It means you can't hold the gun firmly against you in the normal way, so it's hard to get the gun steady.

If any readers have experience of filming shots like this, I'd be very interested to hear about your problems, and how you've overcome them.

With around 8 hours worth of footage 'in the can', I then had to edit it down to a video of around 1hr 10mins to make it watchable. No-one wants to sit through hours of wobbly shots of bushes while I mutter to myself "where the @$%& has the little $&*£@ gone?!!!"

Like a lot of people, I used to snigger at the huge teams of directors, producers, gaffers, grips, lighting cameramen and the rest that are involved on TV shows. Now I understand, and I have huge respect for the people who produce the programmes I enjoy watching. And of course I watch them with a different eye, analysing camera positions, edits, audio and what-have-you.

Anyhow, the DVD is now finished, and I've even sold a few (details at www.marchington.com). I've a long way to go before I recover the money I spent on camera and audio gear, tape, blank discs, etc, etc, never mind see anything for my time. If you're ever tempted to make a video in the hope of making a fortune, think again - you'd earn more per hour sweeping the floor in the local supermarket!

Thanks for the DVD James, I bought it recently and it was very useful.

I only started shooting air rifles a few months ago and am looking to get permission on land near me, but the advice was fantastic.

Hopefully you'll be doing a follow up to it? It would be great to see more stalking as a lot of the DVD was on safety (which is of course important), but watching how you decided to take advantage of the land and cover was most interesting.

It sits alongside my other hunting DVDs from the likes of Mr Doe and Co. (I believe you were also the cameraman in the latest Total Airgun Hunting II DVD?)

What a great sport we enjoy. I control the pests that eat my farmers' crops, get some fresh air and bring an organic meat product humanely killed home for my wife to cook for the family.

Hope you bring out a new DVD soon. It would be good to see some more stalking and shooting in the next one.