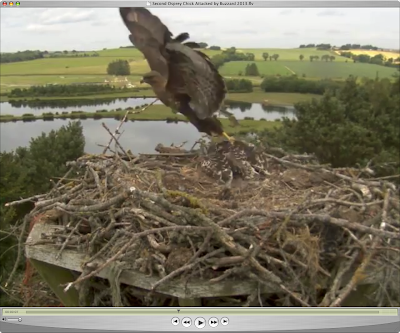 A buzzard has struck again, dragging an osprey chick from the same nest where one of the rare birds of prey was killed by a buzzard last year - and the attack was again caught on camera.

"This is the second year that Buzzards have attacked the chicks, last year one was killed by the buzzards, this year both chicks (almost fully grown) were removed from the nest by Buzzards," writes Jake Webster from the Lochter Activity Centre in Aberdeenshire, who caught the footage on a fixed CCTV camera. View the video here: