Tribute to Michael Cartledge, of the Beretta Gallery London 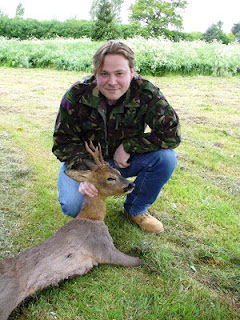 Readers may have heard the sad news that Michael Cartledge, from the Beretta Gallery in London, was killed last week on his way home after the Beretta Christmas party.

George Juer, Michael's close friend and flatmate, has kindly written the following tribute to Michael, and given permission for me to reproduce it here.

A Tribute by his friend George Juer

The death of my dear friend, Michael “Spike” Cartledge will come as great blow to all who knew him and a tragedy to those of us who loved him. One of the brightest stars of the London Gun Trade, Michael was killed not long after returning from hunting dangerous game in Africa. He was run over in the Mall after attending a joyous Christmas party with his colleagues from the Beretta Gallery in London where he worked.

Michael, 32, was educated at UCL (studying languages). He began his working career in the City, followed by trading futures in Paris. He made the decision that this was not the way forward, and that guns were his real interest. He returned to the UK where he secured a job in the Arms and Armour department of Bonhams. Shortly afterwards, he heard that I was leaving J. Roberts and Son Gunmakers, and he applied for my old post as Paul Roberts' assistant. He spent two happy years there honing his skills and knowledge. There was not a shooting or hunting book or journal that he had not read and committed to memory, and many consulted him for his expertise. It was also at Roberts that Michael met Catrina Kennerley, with whom he formed a very special and lasting relationship.

In 2005, when John Ormiston was asked to oversee the opening of London’s Beretta Gallery, he asked Michael to help him in the running of the Gun Room. And, when John retired, Michael continued working in the Gallery, reporting to Tim King, the manager, and working closely with him to ensure that Beretta’s flagship London store maintained its pole position.

We are told to celebrate the life of the departed, but, writing this, I find it difficult to be in celebratory mood (though Michael would no doubt chastise me for it and suggest we go out for a drink). Grateful is the best word to describe how I feel. I was Michael’s flatmate for the last 18 months of his life and a friend for far longer. I am grateful for his friendship, his loyalty, his knowledge, his inimitable character, and the maturity beyond his years. He had a fundamental kindness. He shall be missed; missed as a friend, missed as a font of ballistic knowledge, and missed as the most English of English gentleman.

Richard, another of Michael’s close friends, has put it more succinctly than anyone else:

“The world is an emptier place now. We will miss you, Spike, but whenever we are out with gun, rod or glass in hand, you will be with us and in our hearts.

As a recent appreciative beneficiary of Spike's friendship and one who had so come to look forward to his cheery booming voice answering GUNROOM!!" I am shocked and saddened at this sad loss of one of life's true enhancers. I am glad he enjoyed his last big game hunt, and appalled that it was just that.

We can ill afford to lose such a friend. Rest easy Mike.

I met Mike this Nov a few times whilst buying some guns in the gallery. Mike was a top guy we immediately hit it off, and it was so sad to hear of his untimely passing.I spoke to him the day previous and the booming voice made the gunroom feel alive down the phone.I invited Mike down to shoot driven woodcock in Pembrokeshire in Jan 2012, which he gladly accepted and said it was something he had to do. We would be in touch after my Guns have arrived. My Guns have arrived , they are fab, but we have no Mike. Would one of his close colleagues like to take Mikes place next year as my guest and his!I feel honour bound to offer it to one of his close colleagues, I am sure he would approve, and hopefully bless us with some holy grail opptrtunities for this mystic bird which is a passion of mine.I am shooting two woodcock days next week and will update you the results. My contacts are robjdavies@aol.com, or 07768860254, please feel free to call any time. It was a pleasure to know him.Regards
Rob Davies

Just chanced upon the Tribute to Michael and was taken back to all the happy memories I have of knowing him. On any of my trips to London, the Beretta Gallery was a definite stopover and Michaels warm nature was a major reason for this.
Truly feel a great loss at his most untimely demise.