Thought for the day

"The situation in which a large proportion of the human population live in cities (83% in UK) depending for their food supply on perhaps 5% of the population, is very artificial and unstable and in evolutionary terms, extremely recent and probably transient." ...quite literally - thanks to a helicopter flight kindly laid on by ASI, who were launching their new range of B Rizzini shotguns. As always the CLA Game Fair was a bit of a blur, but it was great to catch up with many, many people, some of whom I knew only as an email address or a facebook photo.

Highlights? Too many to mention now, but I've put some photos on flickr here...
Posted by James Marchington at 11:21 No comments:

Just setting off to the CLA Game Fair (drop in and see us on Gunmakers Row) when I learn that the RSPB have snuck out a press release, embargoed for 00.01 Friday morning, attacking shooters for "killing birds of prey."

They could have issued that release any time this month or next. But oh no, it's embargoed to engineer press coverage on the day the Game Fair opens. A blatant attempt to piss on any positive publicity for shooting that might come from the Game Fair, and realign the news agenda in their favour.

Honestly, you try and work with these people, but they just can't help themselves - their lust for publicity drives them to extend one hand in friendship while they stab you in the back with the other.

Why do I bother? 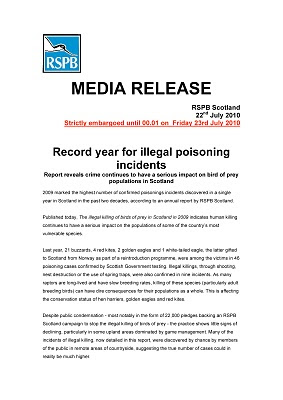 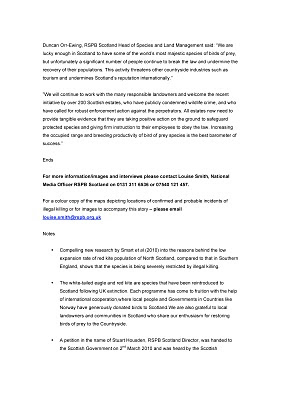 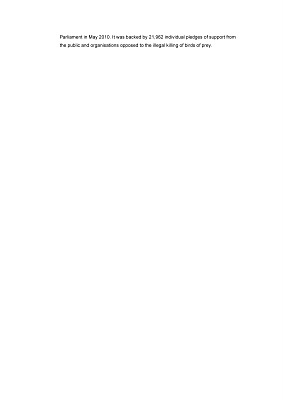 I bet they're breaking out the champagne over at RSPCA HQ. Look at the fabulous publicity they've achieved by prosecuting a bird-lover for drowning a squirrel.

I've dealt with this subject before in a previous post. Basically, drowning an animal is not kind. The animal suffers. Putting it in a sack and thumping it over the head with a weighty object may sound callous, even cruel (depending on how you define 'cruel', but that's a post for another day). But it's humane - the animal doesn't see it coming, loses consciousness instantly, and promptly dies without regaining consciousness. Job done, minimum suffering.

But the RSPCA don't want you to know that. They just want you running scared. Don't be intimidated. Read up on what the RSPCA are really about (63,321 animals killed in 2009) - and keep killing those squirrels.

Coincidentally (really?) the RSPB have a perfectly timed press release out, suggesting you use vaseline and chilli to keep the squirrels off your bird feeders. Funny, they're usually rather harsher than that on invasive alien species. Except the cute ones that visit their members' gardens I suppose.

Still, if you have the sort of neighbour that calls the RSPCA because you're culling pests, you can probably think of a use for all that vaseline and chilli.


Forty years ago, the Royal Society for the Prevention of Cruelty to Animals was a much-needed voice of mercy on animal matters... Today, sadly, it seems to be losing touch with common sense and is pursuing animal rights with a furious logic that seems to have more to do with vexatious litigiousness and a big-sister view of social engineering rather than balanced, public interest charity work.

James Delingpole's not happy either...

AND THERE'S MORE: I read on the perennially entertaining Al Jahom that Tom Blades at BASC has suggested that people who catch a squirrel should pop it round to the RSPCA for them to dispose of. Genius! Since the sanctimonious buggers think that only they know the proper way to deal with the fluffy little vermin, let's land them with the problem - and the vets' bills. In fact, I think I'll go and drop a couple through the letterbox now, ready for when they open up tomorrow morning.
Posted by James Marchington at 00:04 4 comments:

Last night's Fieldsports Channel programme features our visit to Andrew Venables' WMS Steel Challenge in mid-Wales. It makes great viewing, and also provides a taster of our forthcoming foxshooting DVD, which I've been working on with the guys at Fieldsports Channel.

Don't forget, our pigeonshooting DVD, Pigeons With the Experts, is still available - check out a preview and order a copy here »

Posted by James Marchington at 08:47 No comments:

One less fox in the wood 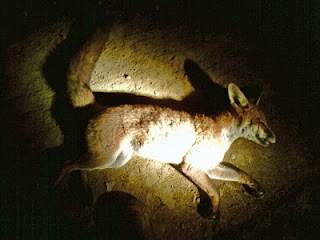 This is one of the cubs raised in the wood next to the release pen. With the birds arriving in about a week, their time is up.

This one wandered out as the light faded tonight, and made an easy shot for the .17HMR. I was using the slightly heavier CCI Gamepoint 20grain ammo, designed to mushroom rather than fragment.

I don't think it would have made any difference on this shot, but I'm finding it a good, solid hitting round.

So, one down, not sure how many to go, but I've seen the vixen, a very dark coloured animal. She'll be harder to get.
Posted by James Marchington at 23:09 No comments:

I feel another Victor Meldrew moment coming on. I'm getting thoroughly sick of the whining by the self-appointed guardians of the environment as they plead to be immune from the very necessary cuts in public spending.

Today's press release reaches a pitch equivalent to a teenager told that no, she can't have the latest iPhone with unlimited contract minutes, because Mummy and Daddy aren't made of money.

The RSPB and other beneficiaries of 13 years of Labour control freakery have 'joined forces to paint a grim picture of a countryside starved of money by budget cuts.'

If the government cuts environmental spending, we are told, farmland birds will resume their slide into extinction, wild flower meadows will all but vanish, uplands will become degraded, polar bears will fall into the sea, the sky will fall in, and we'll thcweam and thcweam until we are thick.

Get real. There. Is. No. Money. It's not so much cutting, as not spending the money we didn't have anyway, and someone just said they might spend even though they didn't have it. I don't see any helpful suggestions about what might be cut instead. Policing? Defence? Education? Health?

In any case, there's something to be said for a cull of the 'experts' curently infesting the countryside, counting and ticking and condescendingly telling country folk that they just don't understand, because they don't have a 2.2 in environmental jiggery-pokery from a Mickey Mouse university, and anyway don't you know that's against the law now, and here's another ream of forms to fill in...

If our wildlife isn't managed by these experts, we don't end up with a vacuum, we get a different balance of wildlife. If you sack the gardener because you can't afford his wages, you don't get bare earth, you get a splendid crop of weeds. And bugger all sea eagles.

If government spending on the countryside has to be cut, so be it. Perhaps the RSPB should start making friends with another group of people who manage 2,000,000 ha, and spend £250,000,000 a year on conservation.

I always preferred wilderness to gardens anyway.
Posted by James Marchington at 09:34 12 comments:

Yesterday I gave a telephone interview to Cork Graham of the US website Cork Outdoors - he was interested in my Rabbit hunting DVD. Cork commented that many of the fieldcraft skills mentioned in the DVD are equally applicable to hunting cottontails in the US - and indeed to other types of hunting.

It's a good point. All those 'wasted' teenage years spent skulking round the woods and fields with a BSA Meteor (and later a Mercury) were actually the perfect training ground for hunting larger quarry like deer and foxes, and gave me a love of wildlife and the outdoors that grows stronger every year. There's worse things for a teenager to be getting up to.

UPDATE: Cork has done me proud, with an extensive review of the DVD as well as the interview, split into two parts. It's all on his blog here »

Incidentally, if you're visiting Cork's website, do check out his earlier career - fascinating stuff!
Posted by James Marchington at 14:05 No comments: We're used to irresponsible reporting of guns and shooting in the media, but a story in the Daily Mail today really takes the biscuit.

The hysterical Lucy Cope of Mothers Against Guns accuses police of "recklessly handing gun licences out like Smarties" to youngsters, including an un-named 10-year-old.

Of course. Because you need a police interview, criminal record check, etc, etc, to buy Smarties nowadays don't you? And if you break the law the police will bang your door down and take your Smarties away. And you can only use your smarties if you're supervised by someone over 21...
Ridiculous, silly woman. There are some of those about, sadly. What depresses me is that the Daily Mail reports her rantings as if they had some value. Only several paragraphs down does the reader learn how the law actually works, and that the 10-year-old won't be able to roam the streets "playing cowboys and indians" with a shotgun, as Cope suggests.

Instead of attacking responsible, legal shooters, perhaps those seeking to reduce gun crime might consider asking for our help and advice. It's just possible we might have something useful to contribute. I'm not holding my breath.
Meanwhile, I'd like to see Lucy Cope apply for a Shotgun Certificate. She'd be turned down flat, as too emotionally unstable to be trusted with a gun. Shame the Daily Mail doesn't apply a similar test.
Posted by James Marchington at 09:26 3 comments: